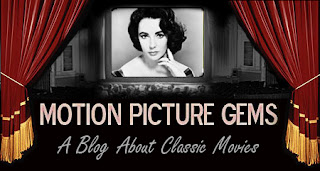 Tom always strikes me as a student of film; he’s driven by intense curiosity about the classics and he does his research well. At Motion Picture Gems, he writes thoughtful reviews and fantastic posts about his experiences going to the movies and seeing live interviews with classic movie stars (it almost makes me want to move to Chicago, the lucky guy). Tom also writes affectionate blogs honoring movie star sisters Joan Fontaine and Olivia de Havilland (to which I contribute, if not nearly enough), Deanna Durbin and Jimmy Stewart, in addition to the bad movie blog Motion Picture Bombs. Thanks for being a guest linker Tom!

Wedding season! Here's a collection of photos and memories from some of our favorite period drama weddings - Enchanted Serenity of Period Films

I've not seen this movie yet but it looks funny: Ray Milland and Paulette Goddard in The Crystal Ball (1943) - Un Cinephile

Vinyl making a comeback? Believe it or not - Retrospace

From last year: a review of Franco Zeffirelli's Jesus of Nazareth (1977), one of my favorite film versions of the life of Christ - Pop Classics
Posted by KC