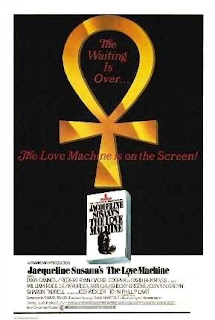 I’m glad to see that The Love Machine (1971) is now available on DVD. I’ve always wondered what a movie with John Philip Law, Jackie Cooper and Robert Ryan would be like-- Movie Morlocks/TCM

Even more movie memorabilia auctions. These include the dress Audrey Hepburn wore when she won her Academy Award and Steve McQueen’s jumpsuit from Le Mans (1971)--
IMDB #1, IMDB #2

A gallery of cinema sex siren posters. I think Diana Dors’ tummy looks kind of odd in that first shot-- The Guardian

Drew Barrymore is the perfect co-host for TCM's The Essentials. Has there ever been another host on that show who has been able to say: “this next film stars my grandpa and my great uncle”?-- About.com

I didn’t know Eva Gabor helped Twister to get its big break by playing it with Johnny Carson on the Tonight Show. How many classic actresses can claim they launched a classic game?-- Mental Floss

I’ve never seen that picture of Marilyn Monroe and Jayne Mansfield together before (last pic in the post). For some reason I assumed they never met. It just seems like that would be too much blonde bombshell for one room. You'd think the copying thing would make their meeting kind of awkward. Was Marilyn flattered?-- Noir and Chick Flicks