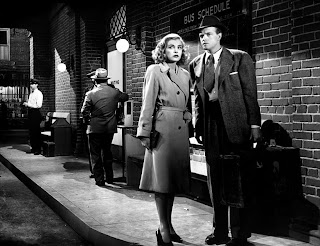 This is a fascinating interview with Lizabeth Scott, recorded in 1996. She is so grand that she essentially performs her answers, and yet she is down-to-earth as well-- YouTube (via The Night Editor)

Shirley Maclaine remembers Elizabeth Taylor. I never realized they were friends, but I can see how they would have gotten along. They both have/had nerve, loyalty and a bawdy sense of fun-- The Guardian

A remake of Some Like it Hot? I mean they’ve got the plot, but everything great that went into that movie is dead. Think about how ridiculous the original would have been in the wrong hands. It was the cast, Billy Wilder and his co-screenwriter I.A.L. Diamond who made it great-- IMDB

The TCM cruise begins. It looks like they have a nice group of guests.-- Alt Film Guide