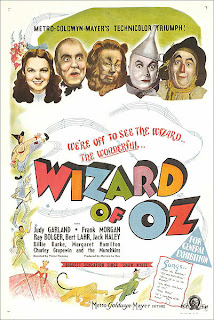 As some of you know, I usually get in a snit when Hollywood classics are remade. I suppose you could make the argument that this one isn’t technically a remake, but I’m fascinated by this new take on the Wizard of Oz. This is a world that I feel could be interpreted in new ways, especially since it came from such a rich series of books. – /Film

I think I’ve posted these Saul Bass title sequences before, but there’s no way to overdo these beauties— Movie Title Stills Collection (via /Film)

The first thing I thought of when I read her statement was, “I wonder if she’s seen Greenhilly?” It’s a sketch from an old episode of SNL. Does anyone remember this? Alec Baldwin is visiting this fancy estate, and the joke is that he is so alluring that he drives everyone to kiss him, from a maid to the family dog (who has a long tongue and a penchant for frenching—don’t worry, it’s a puppet). The first time I ever heard the love theme from Vertigo was in that sketch. I wonder what Novak would think of the use of the score for a satire like that?

Except for this teeny clip that doesn’t do it justice, I can’t find the sketch anywhere online, but at least you can hear the music. This site has the sketch transcript and a shot of the amorous doggy.
-------------------

Lindsay Lohan as Elizabeth Taylor? I think Lohan’s voice would make it difficult for me to accept her in the role. This picture of her in Interview dressed as Taylor makes me think of a little girl playing dress up! Actually, who the heck could play Taylor? We ought to just leave that one alone— The Advocate

The Jane Powell exercise tape. I love it!— Comet Over Hollywood

I have no trouble believing that Joan Collins is totally sane.— IMDB