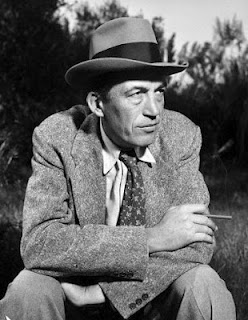 John Huston's 1946 documentary Let There Be Light is now available in a beautiful print on the National Film Preservation website. This is a gut-churning series of unscripted interviews with soldiers who are dealing with the psychic wounds of war.

The film is startlingly intense for the era, though it does not surprise me to see this sort of work from Huston, who was always ahead of his time. The moving narration is by his father, Walter Huston. There are also a couple more war documentaries being featured on the site, which consistently posts a wealth of material for the public to enjoy. All the more reason to make a donation!-- Movie Crazy

I'm always happy to see postage stamp tributes to classic Hollywood, but the execution of these director stamps is a bit odd. The portraits don't look enough like their subjects, and though I like the inclusion of film scenes, they also look funky to me, too fuzzy-- The Wrap

Nothing beats the glamour of classic Cannes. This is a beautiful gallery-- Movie Morlocks/TCM

This is a reminder note to myself: see The War of the Gargantuas (1966). You should also read this post if you need a lesson on the meaning of the word Kaiju, which is of great importance to any fan of movies with gigantic beings-- Forgotten Films