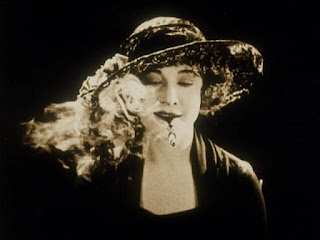 How exciting that we can now see the existing reels of The White Shadow (the first film to which Hitchcock made a significant contribution) online for free! This was made possible in part by the movie bloggers who raised funds as a part of the For the Love of Film blogathon. What an amazing achievement-- Self-Styled Siren

Here's a direct link to the film--National Film Preservation Foundation
And Ferdy's review--Ferdy on Films
----
This is a touching gallery of movie projectionists at NPR. Am I projecting (sorry, can't think of a better word) or do many of them seem sad? As if they are aware their profession is dying? I loved this description of the job from the comments section. It's long, but well worth the taking the time to read:

The job is in constant motion. Reels and platters spin, film snakes its way up and down and around. Gears turn, film flutters, and the whole booth hums and vibrates. It is alive with noise and motion. The projectionist, too, rarely rests. There is always something to thread, something to start, something to build, teardown or move. Thursday nights especially, a projectionist rarely sits. There is a constant sense of urgency and of racing the clock, as every little task that is accomplished must be squeezed in between show starts. In a modern megaplex, you have five minutes between starts. In an older reel-to-reel setting you have to change reels every 20 minutes or you interrupt the flow of the movie and all those hundreds of people downstairs remember for a moment that you exist because you messed up. A projectionist is always aware of the passage of time and that s/he is at the mercy of time. I would like to see some of these qualities better captured in another series of photographs and preserved as a piece of history as we fade into oblivion. I challenge the photographer to do this...

Oh Barbara Payton, you had it rough--Criminal Element
Posted by KC