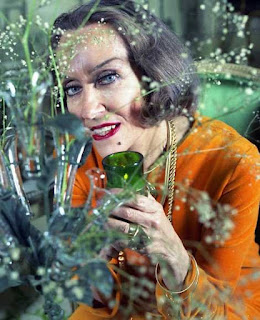 Seriously, was Gloria Swanson ever boring? This is a great interview from 1969--The Guardian

A fun look at young Lana Turner, in These Glamour Girls (1939), already looking like a star--Out of the Past

Several titles from The Rohauer film library, now the Cohen Film Collection, will be restored and released to the public. This is big news for a lot of reasons, but I'm particularly excited to see that my favorite Keaton flick, Sherlock Jr., is in the collection and one of Valentino's best: Son of the Sheik, is slated for re-release.--LA Times

Thanks to Chris of Silent Volume and Mr. Monkey, French filmmaker Louis Feuillade is now on my radar. I'd heard of his Les Vampires before, but I didn't realize how influential he was.

There's going to be a new Taylor/Burton biopic, with Helena Bonham Carter starring as Ms. Elizabeth. Well, that should be interesting. That's all I ask of a biopic anymore--The Onion/AV Club

This gallery of Kim Novak is so candid. I wonder if they'd do that with a star today? It reveals a lot about her personality--Life

Look at this! A photo of Mary Pickford and Douglas Fairbanks Sr. tossed into the mix at Huffington Post. I think the tide is really changing. Mary is starting to regain her proper place in our culture--Huffington Post