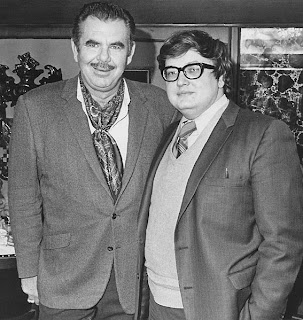 R.I.P. Roger Ebert. Here I was all ready to comment on Ebert's "leave of presence" post, and he leaves us forever. I'm sorry he didn't get the chance to fulfill his dream of reviewing only the films he wanted to see, but it is wonderful that he had the chance to, in a way, say goodbye.

My thoughts are with his amazing wife Chaz. I've been so inspired by her strength and loyalty over the past decade. I'm sure Ebert would not have lasted as long as he did without her.

I'm also grateful to the man himself, for teaching us all how to read a film, not as simply bodies in a theater, but  as people with lives that inform what we see. Never before and never again. He was unique and unspeakably valuable. Time to crack open a bottle of wine and watch Beyond the Valley of the Dolls all night--Chicago Sun Times/Ebert

This is big news: Warner Archives now has a streaming service, and you can sign up for a free two-week trial. I participated in the Beta phase, and I saw some amazing flicks. I'll share my experience using the service, and the films I watched, in a future post.--/Film

This is an interesting question: What classic film star biography would you like to see written? I would love to read more about Teresa Wright. What about you? And good news too, there's going to be an Ann Dvorak biography published later this year. Woo hoo!--Dear Old Hollywood

I always enjoy Raquelle's Warner Archive Wednesday posts. She has delightfully a straightforward and artful style. This week: a review of the Joan Blondell pre-code Miss Pinkerton (1932)--Out of the Past