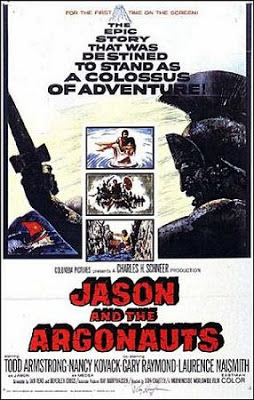 Goodbye to Ray Harryhausen. I think people feel particularly strong affection for him because he was responsible for so many exciting childhood memories. I didn't discover him until I was older, but his work made me feel giddy like a child.

This collection of Harryhausen GIFs is amazing. I don't know where to look half the time!--Warner Archive

Here are some clips of some of his most influential films. Jason and the Argonauts will always be the best in my book--Mental Floss

Joan Fontaine recently gave an interview to Carmel Magazine. It's amazing. She seems to be having a lovely life--Olivia and Joan: Sisters of the Silver Screen

There are a lot of amazing entries in the Mary Astor Blogathon. I especially like this review of the 1930 version of Holiday--A Person in the Dark

Raquelle reviews a re-release of book about the guts of the Hollywood system, which can be more dramatic than the stuff that ends up in the movies--Out of the Past

So apparently the original film version of The Great Gatsby was "rotten and awful and terrible." Unfortunately this was also the only version Fitzgerald was alive to see, but who knows if he would have liked any other version?--Mental Floss