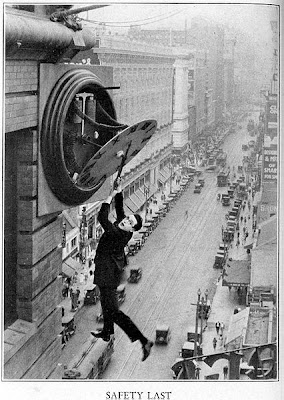 Harold Lloyd says no to a crazy publicity stunt, stunning a group of publicity men who are dim on the concept of fiction and trick shots--Movie Morlocks/TCM

This is an interesting review of Delicious (1931), the second musical frequent costars Janet Gaynor and Charles Farrell made together--Ferdy on Films

It's great to see that the founder of IMDb remains what he has always been, a humble, happy film geek--
The Guardian

I love the list of underappreciated comedies Laura, of Laura's Miscellaneous Musings, shared here. With all the movies she watches, I've often wondered which flicks she likes best--Rupert Pupkin Speaks

Oh how I wish this collaboration would have worked out!--If Charlie Parker Was a Gunslinger, There'd be a Whole Lot of Dead Copycats

I learned so much from Will's top ten things he learned at the TCM Film Festival, but the thing that made me squee was this: "TCM is launching a streaming app this Summer." I hope a streaming service for those who are not cable subscribers will be next--Cinematically Insane

If you're a Google Reader user wondering what to use after it is retired 7/1, I recommend The Old Reader. It's a simple design, and very similar to Google--The Old Reader