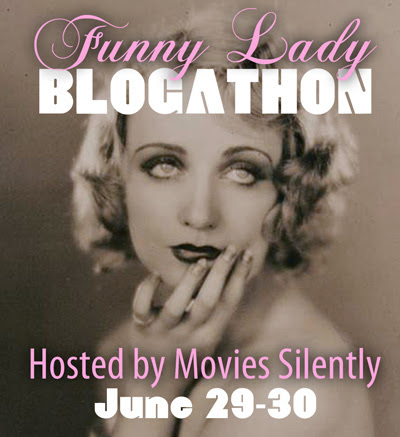 I'm disappointed that I won't have time to participate in the Funny Lady Blogathon at Movies Silently, but I can't wait to check out the contributions--response has been huge. If you want to participate, you can submit a link as late as the days of the blogathon, June 29 and 30--Movies Silently

Can you imagine being invited to inspect Elizabeth Taylor's first wedding gown? And then writing the auction notes for the Christie's catalog? This is an amazing story, with lots of gorgeous pics of the frock MGM costumers made for Taylor's first trip to the altar--Glamamor

Marni Nixon is best known for her work in movie musicals, singing for Natalie Wood, Deborah Kerr and Audrey Hepburn. She had a distinguished performing career as well, in addition to a successful run hosting a Emmy-winning children's program. I enjoyed, and highly suggest reading her autobiography, but there were a few interesting tidbits in this recent article that I don't remember from the book--The Guardian

Eleanor Parker could never have been a huge movie star, because she was too darn good an actress. She really knew how to disappear into a role. I adore her and hope she had a wonderful birthday this week--
Alt Film Guide

I always cringe when I read things like, "how to watch Mary Pickford's silent films without being bored to tears?" That is one woman who will never bore me, but I do understand that we're not all immersed in the world of classic movies (well, maybe all of you reading. . .). This is an interesting post, and I agree that since we usually cannot watch silent movies the way they were intended, it can be fun to work with soundtracks to make them our own. I think that's why I can tolerate a dramatic experiment like Giorgio Morodor's modern (though now, amusingly, also kind of dated) Metropolis (1927) score. (hat tip to @MovieQueen2012 for the link)--October Rebel

It's so rare to read a piece about Liberace that doesn't scream camp and treat him like a joke. This is a thoughtful, fair post about Lee and his sole screen appearance in Sincerely Yours (1955), but don't let that scare you away, it's very entertaining--She Blogged By Night

This post has gotten me more interested in checking out the Hitchcock 9, a collection of his silent films recently restored by British Film Institute that is now touring theaters. I never realized how highly Hitch thought of silent movies--Alfred Hitchcock Geek
Posted by KC