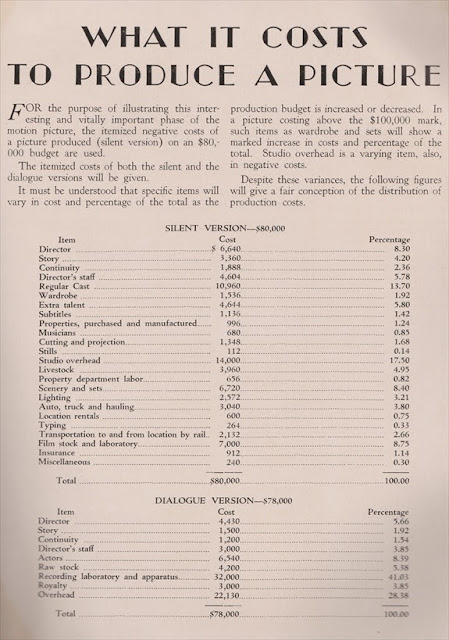 So that's what it cost to produce a movie in 1929. Good to know--If Charlie Parker Was a Gunslinger

This is an interesting article about the lost art of fancy movie talk, the Mid-Atlantic accent, or as they call it here, Katharine Hepburn's fake accent. That said, I didn't like how they didn't note that despite her own horror at how she sounded, Clara Bow had a good voice for the movies, and her talkies did well. That supposed Gloria Swanson line was also not her, but her character Norma Desmond in Sunset Blvd. (1950)--The Atlantic

I love this behind-the-scenes photo of Harold Lloyd performing his famous Safety Last! (1923) clock gag. The movie is so well made that seeing this didn't destroy the illusion for me--Mental Floss

The Day the Clown Cried sounds like such a horrible idea. In the famously suppressed film, Jerry Lewis stars as a clown who is forced to lead children to the gas chamber in a Nazi concentration camp during World War II. Of course I am dying to see it, though it looks like clips like these are all we will ever see. Maybe that is for the best. If Lewis himself hates it, it has to be pretty off--/Film

I need to set some time aside to explore the Media History Digital Library. It sounds like an amazing resource--Observations on Film Art

The Kickstarter for the Alice Guy-Blaché documentary I wrote about last week has made some progress, but they still have a long way to go. I've been enjoying the clips from Alice's films and other pieces of information I get sent automatically as a donor. Consider giving at least $1, this is an important project and they've only got 10 days to make their goal!--Be Natural/Kickstarter