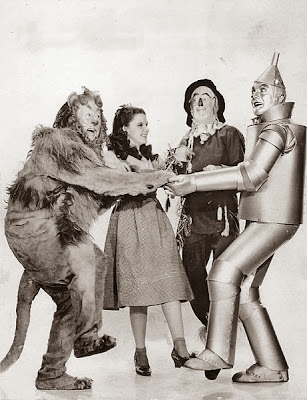 The recent release of The Wizard of Oz (1939) in 3D seems to have drawn mixed reactions. It sounds like the overall verdict is that the restoration is gorgeous and the 3D is fine (if sometimes blurry to some), but not a significant enhancement. I don't see how adding 3D is different from colorization. The bottom line is that the movie wasn't made that way, so why tamper with it? I am glad there's a lovely new print of this amazing film though--Leonard Maltin/Movie Crazy, Comet Over Hollywood, Cinematically Insane

Does it seem like there are suddenly a lot more biopics of classic stars? Now there's going to be one about Montgomery Clift. Hopefully these flicks will draw more attention to classic films and ultimately help in their preservation--The Guardian

How amazing that you can now buy a DVD of the Ford and Hitchcock films that were though lost before their discovery in a New Zealand film archive three years ago. What other treasures will be found and made available to us in the future?--Movie Morlocks/TCM