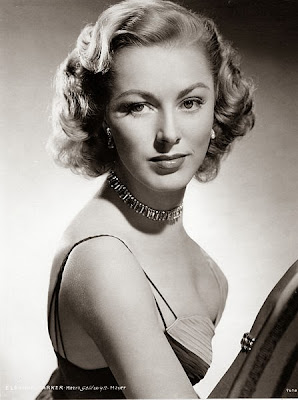 RIP Eleanor Parker, one of the most magnetic and versatile actresses of the Golden Age of Hollywood. She is one of my favorites. I especially loved her in Caged (1950) and Scaramouche (1952), two very different roles. There were lots of beautiful tributes around the Web this week; all people who knew that she was much more than the baroness from The Sound of Music (1965)! Some favorites:

Lots of great information in this one, including the schedule for the TCM tribute to Parker on 12/17--Laura's Miscellaneous Musings
Love the photos in this one. What a stunning collection!--Art, Movie, Wood and Whatnot…
This is a nicely-detailed obituary--Comet Over Hollywood
A brief tribute, but it's just about the best description I've seen of her appeal. Lovely photos too--
A Mythical Monkey Writes About the Movies

This is a great interview with the actor who played opposite Audrey Hepburn in Charade (1963) at age six. Now, in addition to having shot both Hepburn and Cary Grant with a water pistol, he is professor and chairman of the Department of Neurology at the Medical College of Wisconsin. Not bad!--Journal Sentinel

I'm proud that Scarecrow Video, the largest video store in the world, is in my city, but I have to admit I haven't been there for years. This video tour of the entire store has convinced me I need to start going there again, not only to ensure this amazing collection stays intact and available to the public, but to get the movies I really want to see--/Film

I love this review of an episode of Moonlighting inspired by two styles of classic Hollywood moviemaking. I'm dying to see it now. Looks like it's on YouTube--Java's Journey

One of my favorite things time ten: great discoveries of lost movies and TV shows--Mental Floss

You know, if it were 30 years earlier, I could have seen Bette Midler as Mae West. Doing it today seems a bit odd, though I'm definitely curious--/Film

Hat tip to Laura's Miscellaneous Musings for spreading the word that the TCM Remembers 2013 clip is out. So reliably sad, but heartwarming: