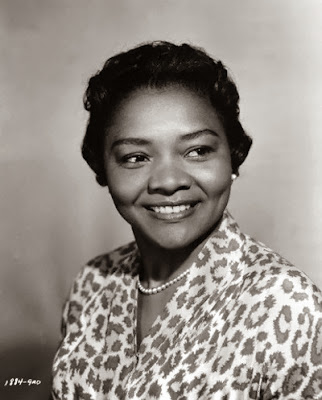 RIP Juanita Moore, an actress and dancer who made her biggest impression in an Oscar-nominated performance in Imitation of Life, though she did much before and after, and continued to work for the rest of her 99 years--Self-Styled Siren

Goodbye also to Alicia Rhett , who played Ashley Wilke's sister in Gone With the Wind (1939).

I also must note the passing of Run Run Shaw, at an amazing 107.This post gives you an idea of the impact his movies had on both world cinema and hip hop culture--HipHopNC

I'm grateful to Shaw for giving us Maggie Cheung and Chow Yun-fat and for exploiting the cinematic qualities of kung fu. His movies were also just plain fun. My favorite Shaw Brothers production (though this particular title was produced by his brother and partner, Runme), was Infra-Man (1975):

This is a great post about Clark Gable's 1933 New Year's resolutions, at least as he claimed them to be in an interview for a movie magazine. They seem pretty grand for the supposedly down-to-earth Gable though. Ah movie magazines--Dear Mr. Gable

I'm fascinated by this catalog from the 2008 Pickfair Estate Auction. Mary had a lot of fancy stuff. So many chairs!--Julien Auctions

I have never been able to figure out the wacky Criterion Collection sketches that hint at upcoming releases for the new year. Fortunately, these people can at least make a few good guesses--Criterion Cast

This is an astonishing tour of the gorgeous Georgian Terrace Hotel, which apparently has a strong connection with classic Hollywood, one of them being that it was once visited by Rudolph Valentino. Great detail and photos--My Love of Old Hollywood

How fascinating that Steven Speilberg may film a Dalton Trumbo script fifty years after he wrote it. You couldn't find a better tribute to his timeless appeal--/Film

This photo of Beluah Bondi blows my mind. I'm so used to her playing old ladies. She's almost glamorous here--Oscars.org