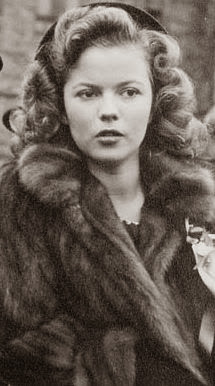 I took a break from the internet for a few days this week, and on my return was saddened to learn Shirley Temple Black had passed. She was one of those rare classic film stars who was never forgotten, the one name from those days you could mention to just about anyone and they would know who she was. Greatness would have found her no matter what she did; she was born with remarkable talents, which she developed with hard work, applying them successfully and confidently to whatever she pursued.

I'm sure Shirley Temple was the introduction to classic movies for innumerable people. I know that's been the case with my daughters. My toddler asks to see movies with "the little girl" and my kindergartner says she loves "Mary Lou" the name of Temple's character in Pardon My Pups (1934), a comedy short she stole in her supporting role as a kid sister. We love Temple the dancer the best though, especially in her numbers with Bill "Bojangles" Robinson. They're second only to Astaire and Powell dancing to Begin the Beguine in this house. This is our favorite YouTube video of the pair, a compilation of dances that makes it clear why Temple loved her "Uncle Billy" so much:

Of course we had to try the famous Shirley Temple drink after watching her movies. A bit sweet to give to the kiddos all the time, but fun for a treat. Here's the recipe.

Leonard Maltin's tribute to Temple is especially nice, because he actually met, and was charmed by the actress in the 80s--Movie Crazy

The Guardian
A Mythical Monkey Writes About the Movies


Here's a couple of posts with good information about Temple's political career, which she started at age 41:
Cinematically Insane
The Guardian

RIP Shirley, you were so big that you never did or could fade away.

RIP also Sid Caesar. Not a huge presence in films, but he made his mark, in addition to being a television legend--The Guardian


Even more exciting guests for the TCM Film Fest: Mel Brooks, Maureen O'Hara, Margaret O'Brien and Richard Dreyfuss. I'm excited they're showing a restoration of Stormy Weather (1943) too. I think I picked a good year to attend!--The Celebrity Cafe


Jayne Mansfield's Pink Palace has always impressed me because everything about it is over-the-top. What kind of a life would you life in a house that looks like this?--Dangerous Minds


How have I gone so long in life without knowing about Sex Madness (1938)?--Dangerous Minds


The Great Villain Blogathon sounds like so much fun. What a great idea!--Shadows and Satin