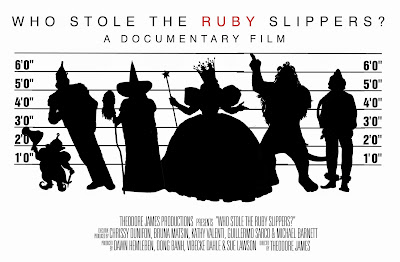 Documentary filmmaker Theodore James recently gave me the heads-up about his new project, a film about a pair of ruby slippers worn by Judy Garland in The Wizard of Oz (1939) that were stolen from the Judy Garland museum in 2005. Though private investigators have had made progress on the case, it is not quite solved yet. Check out his Kickstarter page (the project is now fully funded!) for more information--Kickstarter

I'm sure this interview has made the rounds by now, but I'm delighted that Doris Day took the time to talk to Robert Obsborne in celebration of her 90th birthday. I look forward to these annual updates from Day--TCM

The Eyman interview inspired me to revisit the Monkey's gallery of photos showing how John Wayne aged through the years. He was a good looking guy his whole life--A Mythical Monkey Writes About the Movies

Grey Gardens (1975) is one the the films I'm most looking forward to seeing at TCM Film Festival this year. The Maysles brothers were such compassionate filmmakers and that made all the difference in the filming of this classic flick. You can see that same compassion in Albert Maysles' first documentary, Psychiatry in Russia (1955), which is a lot more entertaining than it sounds and well worth the 13 minute watch--Dangerous Minds

The Criterion Collection will be releasing a series of films on triple format: DVD, Bluray and VHS. This doesn't surprise me, VHS seems to have grown in popularity over the past few years. I have to admit I don't understand why, but it's interesting that CC is responding to fan interest--Criterion Cast

As my knowledge of Hollywood portrait photographers is pretty much limited to George Hurrell and Clarence Sinclair Bull, I was thrilled to read this post about MGM studio photographer Ruth Harriet Louise--Backlots

Amazon is now releasing its own set-top box. It looks like it has some interesting features, but I don't know how many more little black boxes I can stack on my media cart!--/Film
Posted by KC