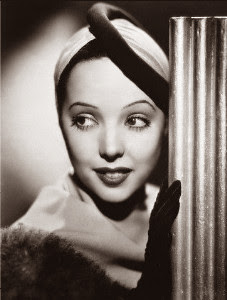 I love this tribute to Jessie Matthews, the English musical comedy star. It's hard to explain the appeal of this cheery star; she just makes you want to grin--Immortal Ephemera

This is a fantastic interview with James Best, who had a long Hollywood career, but is probably best known for playing Roscoe P. Coltrane on The Dukes of Hazzard. My favorite quote: "I loved Jerry Lewis. I once told him he was five different people, and I hated three of them."--Comet Over Hollywood

Enter by 5/3 to win a copy of Richard Corliss' Mom in the Movies, a book that was featured at TCM Film Festival--Once Upon a Screen

There's a new line of clothing and accessories based on the hallway carpet pattern from The Shining (1980).--/Film

A couple of reviews that convinced me I need to see these movies:
Teacher's Pet (1958) at Laura's Miscellaneous Musings
Carnival Boat (1932) at Mondo 70