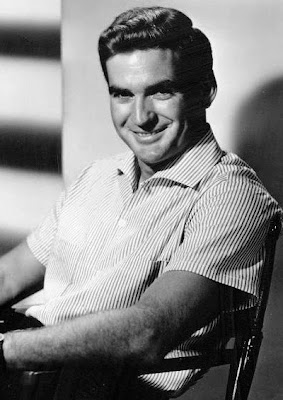 Even though I had no idea if it was even a possibility, I always hoped I'd get the chance to see Rod Taylor at the TCM Classic Film Festival some day. I was sad to hear he passed on Wednesday, days away from his 85th birthday.

He's my all-time actor crush, muscular and masculine, but always courtly with the ladies. I so loved to watch him bat those long eyelashes whenever he flirted. He was hugely underrated as an actor, it's amazing how well he could do any genre, but he was always beloved.

If you're looking to watch some Taylor films in tribute, here are some more great titles--
LA Times

Love this gallery of Taylor shots, especially the photos from his later years. He was such a foxy grandpa--Newzcard

This article has some nice quotes from the actor's daughter Felicia, but they sure picked some weird films to highlight in the sidebar--The Daily Telegraph

Also be sure to check out this fantastic Rod Taylor site. Very interesting stories about his life here. I especially love the piece about his relationship with the love of his life Carol Kikumura--
The Complete Rod Taylor Site

Actor Patrick Kennedy was 33 when he met Luise Rainier. She was 99. His story about their friendship is very sweet and reveals a lot about the actress--The Guardian

I've been very curious about Russ and Roger Go Beyond, the biopic in production which will follow Russ Meyer and Roger Ebert as the director and screenwriter make Beyond the Valley of the Dolls. Will Ferrell has long been attached to play Meyer, now it looks like Josh Gad will play Ebert. I only know Gad as the friendly snowman Olaf from Frozen (2014), but he seems to have the right look to play the film critic in his early years--/Film

Director Mike Leigh has some interesting things to say about digital vs. 35mm format. I still don't see why there can't be multiple formats for film. Especially if there is a market for both, and even if one is more economically robust than the other--The Dissolve

If you're a big Ann Dvorak fan, her biographer Christina Rice is offering some of the actresses' personal photos for sale. They're a decent deal at $10 a piece--Ann Dvorak: Hollywood's Forgotten Rebel
Posted by KC