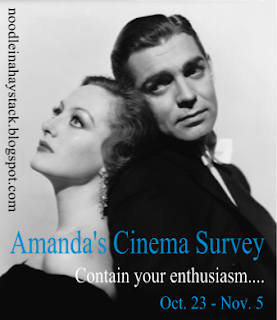 I finally got around to tackling the yearly survey from Amanda of A Noodle in a Haystack. It was lots of fun. Thanks for putting this together Amanda:

1. What is your favorite movie starring William Powell and Myrna Loy, excluding all of The Thin Man films?

Love Crazy (1941) is hilarious. The first time I saw it, I couldn't believe I hadn’t heard of it before. Why isn’t it a huge classic?

2. Name a screen team that appeared in only one film together but are still noteworthy for how well they complimented each other.

5. An actor/actress who, when you see one of their movies, you always wish that someone else was in his/her role?

I don’t get Greer Garson.

6. An actor/actress that someone close to you really loves that you can't stand or vice versa?

My husband doesn't get Kim Novak, but I adore her.

7. An actor/actress that you both agree on completely?

My husband is on board with me about James Cagney. He didn’t like him much personally after reading his autobiography though. I told him, he’s an actor, they have big egos!

8. Complete this sentence: Virginia O'Brien is to Ethel Merman as...

Hedy Lamarr is to Paulette Goddard (I based my choice on facial expressiveness--is that a word?)

9. What is your favorite film starring Ray Milland?

11. An actor/actress that you would take out of one film and put into a different movie that was released the same year?

I would have loved to have seen Marilyn Monroe star in Breakfast at Tiffany's (1961) . I thought Audrey Hepburn was a great Holly Golightly, and it has long been one of my favorite movies, but I always wonder how Monroe would have approached the role.

12. Who was your favorite of Robert Montgomery's leading ladies?

13. You think it would have been a disaster if what movie starred the actor/actress who was originally asked to star in it?

14. An actor/actress who you will watch in any or almost any movie?

Cary Grant (almost Bette Davis, but I can’t bring myself to watch all of Wicked Stepmother (1989))

16. You have been asked to host a marathon of four Barbara Stanwyck films. Which ones do you choose?

17. What is, in your mind, the nearest to perfect comedy you have ever seen? Why?

My Man Godfrey (1936), because the cast selection, timing and quips were all so perfectly executed.

18. You will brook no criticism of what film?

19. Who is your favorite Irish actress?

Maureen O’Sullivan. Girl-next-door with a hint of glamour.

I’ll Be Seeing You (1944) was beautiful and heart-wrenching.

21. Do you enjoy silent movies?

22. What is your favorite Bette Davis film?

24. This one is for the girls, but, of course, the guys are welcome to answer, too: who is your favorite Hollywood costume designer?

25. To even things out a bit, here's something the boys will enjoy: what is your favorite tough action film?

26. You are currently gaining a greater appreciation for which actor(s)/actress(es)?

28. Which actors and/or actresses do you think are underrated?

29. Which actors and/or actresses do you think are overrated?

32. Of those listed, who is the coolest: Paul Newman, Robert Redford, Steve McQueen, or Patrick Stewart?

33. What is your favorite movie from each of these genres:

Hitchcock: I suppose Hitchcock is a genre! Notorious (1946)

Here's the link to the survey if you'd like to give it a shot, but note that Amanda will only be posting results for one more week.
Posted by KC No comments:

Email ThisBlogThis!Share to TwitterShare to FacebookShare to Pinterest
Labels: Survey 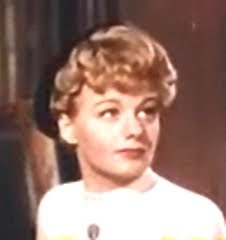 Nudity on stage? I think it's disgusting. But if I were twenty-two with a great body, it would be artistic, tasteful, patriotic and a progressive religious experience.

This deliciously creepy 'toon is definitely not for the kids. James Mason flawlessly narrates a surreal animated version of the classic Poe tale. Mason had such a talent for creating crazed, but strangely sympathetic villains. His tone fits the bleak, mysterious animation perfectly.

The flick has an interesting history. Apparently, it was originally meant to be made in 3-D, though there is no evidence that it was ever exhibited in that format. It was also the first cartoon to receive a British X-rating. Though it was nominated for an Academy Award, the 'toon lost out to a Disney short. In 2001, it was selected for the National Film Registry as a historically significant film.
Posted by KC 2 comments:

The Sound of Music cast reunites on Oprah. Neat, and sort of hilarious. Was it O’s idea?— The Guardian

Zero for Conduct (1933), one of the best flicks ever made about rebellion— A Mythical Monkey Writes About the Movies
Posted by KC No comments:

This is an interesting review of Carnival of Souls (1962), the great independent horror flick-- Movie Morlocks/TCM

A woman on a cell phone at a Charlie Chaplin premiere? Hmm, I can think of a lot of other things this woman could be doing. I do think it’s interesting that this story has popped up during the Back to the Future 25th anniversary celebration. How amusing that this fellow has spent so much time on this. It certainly could make some cash for his “cause”-- Cinematical
Posted by KC No comments:

This is a lovely gallery featuring the fashions of Marlene Dietrich. She could really wear a tux— The Huffington Post

Pussies galore! (Kittens make any post better.)-- Out of the Past

I hated Peeping Tom (1960) for being so unsettling, but it is beautifully filmed, brilliantly original and has one of the most sympathetic psychos I’ve ever seen— Movie Morlocks/TCM

If you love restrained, atmospheric horror, you must see The Ghost Ship (1943)— Pussy Goes Grrr
Posted by KC 2 comments: 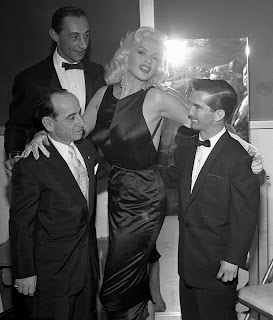 Men are creatures with two legs and eight hands.

I’ve never heard anyone describe Hitchcock’s movies like this. She makes some good points— The Guardian

I keep forgetting how amazing Lon Chaney was. How could I?— The Big Parade

Free classic zombie movies online. The kind without all the guts. Sounds good to me.--AMC
Posted by KC No comments:

Kim Novak has been diagnosed with breast cancer. Let’s think healing thoughts for her.— ABC.com

A short blurb about Ernest Borgnine, including info. about what he’s up to these days and his small role in Red (2010)--- Slate

Must read this book: Adventures of a Hollywood Secretary— The Kitty Packard Pictorial
Posted by KC 2 comments:

RIP Barbara Billingsly—not a classic movie star, but of the time, and too wonderful to ignore.— EW

$606,000 for ten Audrey Hepburn stamps? I don’t get it. At least the money is going towards a good cause— IMDB 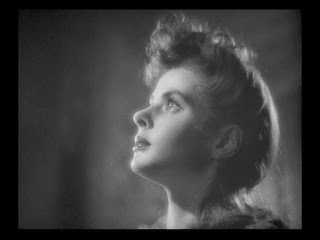 I've never sought success in order to get fame and money. It's the talent and the passion that count in success.

So do you still have your VHS tapes?-- Classic Montgomery

There’s something about Mary Astor— A Shroud of Thoughts

Ernest Borgnine crackes me up— IMDB
Posted by KC No comments:

Have you seen Psycho (1960) recently? I watched it again this summer; it was the first time in years. It plays in perfect tempo, like a piece of well-crafted music— Cinematical

Mr. Maltin reviews the new Cecil B. deMille bio. Sounds like a good one— Movie Crazy

Loony Tunes will release its notoriously racist cartoons. I watched these on YouTube, and found them historically interesting, but I can’t imagine having them in my home. I’d feel like they were burning a hole through the shelf in my entertainment center-- Cinematical

I love this recurring film locations feature. This time we see the locations for the Doris Day musical April in Paris (1952)-- Dear Old Hollywood

A review of Old Maid (1939) that opens with a reference to stick insects. This sort of freedom is what I really like about blogging-- Bette's Classic Movie Blog
Posted by KC No comments: 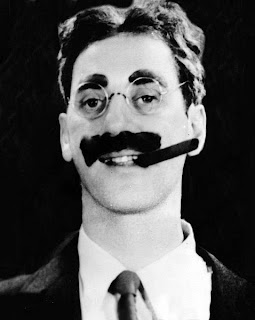 Anyone who says he can see through women is missing a lot.

My blogging buddy Monty, of All Good Things, was kind enough to have me as a guest on his blog. Some of his questions were painful to answer!— All Good Thinks

A new booka about Errol Flynn and Olivia de Havilland is out. Please let it be juicy, but not sleazy.-- Olivia and Joan: Sisters of the Silver Screen

RIP Roy Baker, 93, director of the best Titanic movie (in my less-than-humble opinion), A Night to Remember (1958) [it bums me out that my beloved Guardian got the date of that Marilyn Monroe movie wrong]-- The Guardian
Posted by KC 5 comments:

This is a beautiful message from Jill Curtis to her husband's fans— Tony Curtis: The Art of Hollywood

What you should know about Google TV— Criterion Cast

Here are some clips of Wisdom’s career if you, like me, didn’t know who he was— The Guardian

Stars and their cars—vroom vroom!— And. . .Scene

I can’t picture a guy working a cigarette holder like this today-- Via Margutta 51
Posted by KC No comments:

The astonishing Barrymore legacy The Guardian

Warren Beatty in Mickey One (1965), directed by Arthur Penn— Edward Copeland on Film

I have mixed feelings about this new book of Marilyn Monroe writings. She willed the materials to Lee Strasberg, but did she mean for them to be published?-- IMDB

I love this James Dean photo. I wonder how he got out of the can?— Classic Forever
Posted by KC No comments: 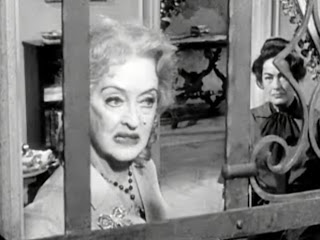 I do not regret one professional enemy I have made. Any actor who doesn't dare to make an enemy should get out of the business.