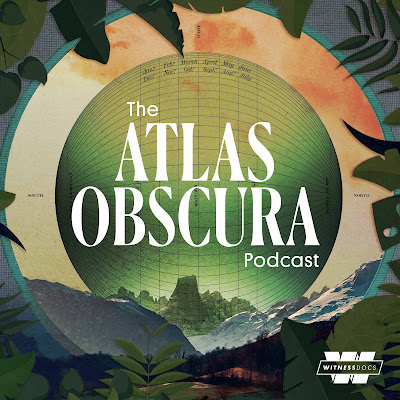 The Atlas Obscura Podcast
Josephine Baker’s Chateau
July 18, 2021
A woman travels to Josephine Baker’s castle in France. She finds the experience so moving that she starts a business through which she helps other women have the experience. Some of them are traveling overseas for the first time. This is a deeply moving story. 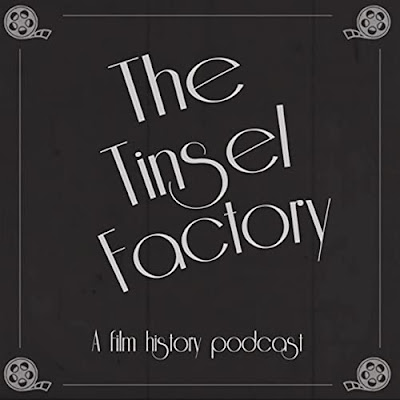 The Tinsel Factory: A Film History Podcast
Hollywood Fight Club: Frank Sinatra vs. Marlon Brando
July 25, 2021
This no-frills show is a great place for those new to classic movies to start learning about the colorful characters that populated the industry in the early years of Hollywood. However, as someone who knows plenty about that time, I was entertained by this episode about Brando and Sinatra tangling on the set of Guys and Dolls (1955). 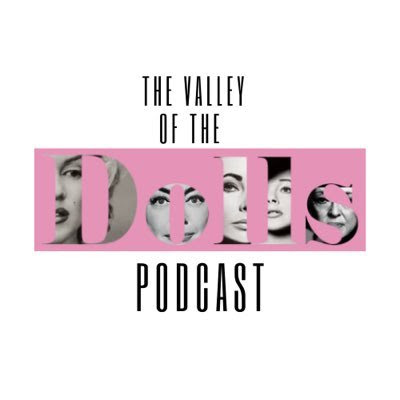 The Valley of the Dolls Podcast
Judy Garland’s a Star is Re-Born (Part One)
August 5, 2021
I learned a lot in this detailed history of the making of Judy Garland’s A Star is Born (1954). The production was troubled and complex, hence the need for a part two to this episode.

Lions Towers & Shields
Nice Guy, or Good Man?
July 31,2021
This is a thoughtful discussion of the 1960 film The Apartment. I appreciated the way the guests acknowledged that Jack Lemmon’s character isn’t so much an innocent as insensitive in the way he enables the mistreatment of women to advance his career.
Posted by KC No comments:

On Blu-ray: Cornell Woolrich Adapted for Solid Monogram Programmer, I Wouldn't Be in Your Shoes! (1948) 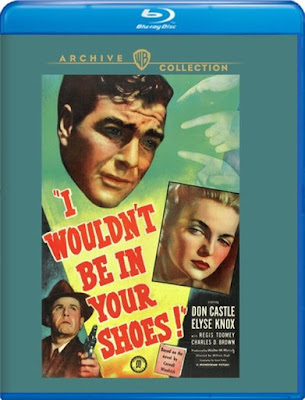 I love a speedy, efficient programmer. Sometimes it’s nice to just spend an hour and change with some fascinating characters and a decent story. Productions like the modestly-budgeted, but engrossing Monogram film I Wouldn’t Be in Your Shoes (1948), newly released on Blu-ray, fit the bill perfectly.
With a script written by Steve Fisher (I Wake Up Screaming) and based on a story by Cornell Woolrich, this appealing little drama has a strong film noir pedigree. It’s the story of a married dance team Tom and Ann (Elyse Knox and Don Castle) on the skids. Their careers have stalled and they see no path out of their strained existence.
The set-up for what follows stretches plausibility and is the film’s weakest point. One night Tom throws what he thinks is an old pair of shoes at a cat howling outside the window. Ann quickly points out that they were actually his only tap shoes. After a fruitless search to retrieve them, the shoes mysteriously turn up outside their apartment door the next morning.
That same night, a man in the building was murdered for his money. Footprints found at the scene match Tom’s briefly missing tap shoes. Police make the connection when he finds a wallet full of cash and his and Ann’s sudden spending spree attracts their attention. It’s a bizarre series of coincidences, but also a perfect noir set-up.
Tom goes to jail, Ann struggles to find evidence to free him, and Police Inspector Clint Judd (Regis Toomey) eagerly steps in to help. What follows is a series of dead ends and twists and turns that are amusing, though the identity of the killer is easy to determine early on. The tender relationship between Tom and Ann, and the way Ann becomes vulnerable, but remains strong in the sleazy world outside their marital bubble are the main draw here.
I was struck by the gentleness of the prisoners Tom encounters on Death Row. They spend their time listening to Chopin records, tending to each other’s emotional wounds, and generally demonstrating more compassion than they received in the outside world. In these scenes I was especially touched by the quietly charismatic performance of Bill Walker, one of those busy studio-era actors that has inevitably shown up in several favorites of the typical classic film fan.
This isn’t a life-changing film, but it is enjoyable. I’d love to see more of these so-called Poverty Row productions on Blu-ray, because it’s a treat to see them respectfully presented in good prints.
Special features on the disc include the short The Symphony Murder Mystery and the cartoon Holiday for Shoestrings.
Many thanks to Warner Archive for providing a copy of the film for review.
Posted by KC No comments: 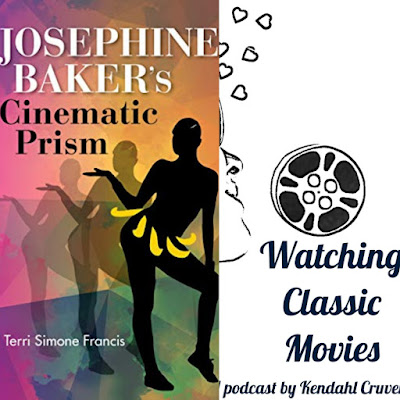 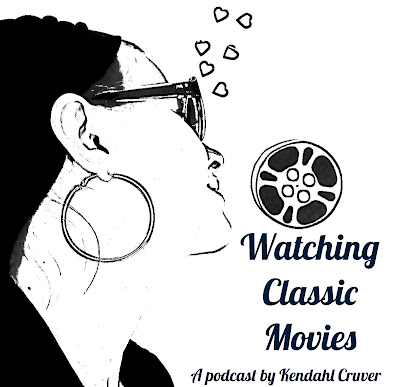 Book Review--Fading Fame: Women of a Certain Age in Hollywood 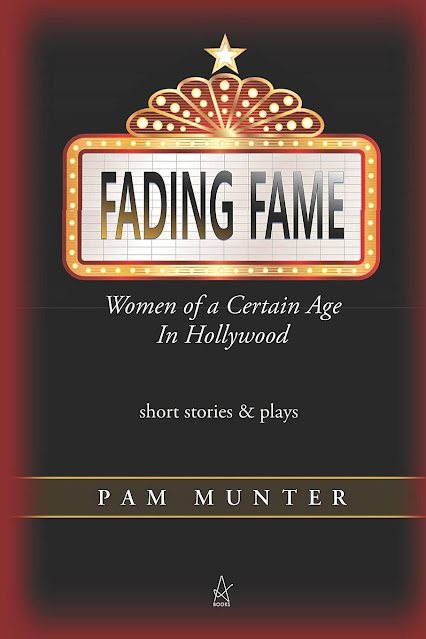 Fading Fame: Women of a Certain Age in Hollywood, Short Stories & Plays
Pam Munter
Adelaide Books, 2021
In a world that tends to mock, dismiss, and misunderstood “women of a certain age,” it was interesting to find a book dedicated to approaching the subject with empathy and respect. Pam Munter’s Fading Fame: Women of a Certain Age in Hollywood is an intriguing exploration of the magnificence of famous women moving past middle age, flaws and all.
This collection of stories and plays features women that are a mix of the real and imagined facing the challenge of careers, lovers, and other aspects of their youth drifting away. It sounds glum, but the richness of the characters draws you into their orbit. These are multi-faceted ladies who have lived extraordinary lives and they remain remarkable.
In addition to characters created out of whole cloth, Munter imagines the inner life of cinematic celebrities like Doris Day, Frances Marion, and Mary Pickford. The tenderest piece features a frail Ethel Barrymore facing the challenge of her last film, Young at Heart (1954). It’s easy to imagine this witty, acerbic, but ailing woman reminiscing in her dressing room and wryly managing Frank Sinatra on the set.
There are two lightly humorous, but deep-reaching plays in the book: Life Without and Janet, Drake Private Eye. The former a four-hander featuring three women who slyly get the best of a narcissistic man whose ambitions to be a cabaret performer outweigh his talent. The latter an interesting exploration of ambition and the satisfaction that can come from choosing life over career.
In the end, I found this a fascinating collection because of the way the stories embrace the complexities of fame and being a woman in a rocky industry. It’s bittersweet, but you are constantly reminded that these characters are remarkable people, with memories that will always elevate them.
Many thanks to Adelaide Books for providing a copy of the book for review.
Posted by KC No comments: 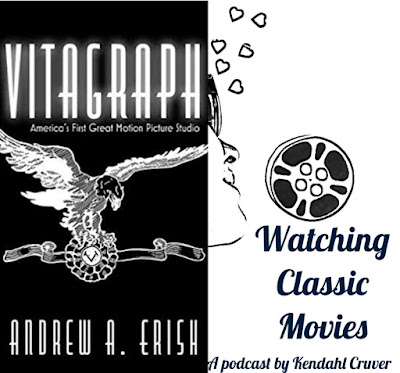 When the movies were new, Vitagraph was the most successful film studio in the world. This was a time where as much as 85% of the population was seeing movies on a regular basis, that number is now less than 10%. Vitagraph’s innovations are numerous and influential to the present day, but the impact of the company has been overlooked in accounts of the time, until now. I spoke with Andrew Erish, author of Col. William N. Selig: The Man Who Invented Hollywood, about his new book Vitagraph: America’s First Great Motion Picture Studio, in which he sets the record straight and tells a fascinating story about the tumultuous birth of American cinema.
You can listen here at Anchor.
The show is also available on Spotify, PocketCasts, Breaker, and Radio Public.
You can learn more about Andrew’s book at UniversityPress of Kentucky

Eyefilm Museum and The National Film Preservation Foundation stream Vitagraph films for free, in addition to many other fascinating early movies.

The book of early film criticism we discussed is The Art of the Moving Picture, by Vachal Lindsay. It can be read for free at Project Gutenberg.

Recommended films discussed in the episode (titles link to films when available):

Stay tuned for the finale of my inaugural summer season on Wednesday, August 18! 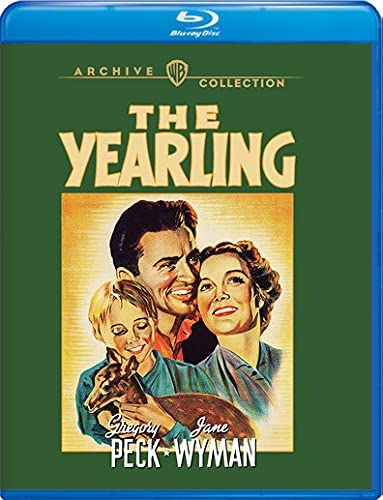 Few stories explore the beauty and brutality of life as well as The Yearling. The first film version of Marjorie Kinnan Rawlings best-selling novel balances these opposing, but interconnected elements with simplicity and elegance. Directed with restraint by the underrated Clarence Brown, the film is deserving of its classic status. As I recently watched the new Blu-ray release of the film from Warner Archive, I was struck by how beautiful it is as well.
The setting is Florida in the 1870s. Pre-teen Jody Baxter (Claude Jarman Jr.) lives with his parents Orry (Jane Wyman) and Penny (Gregory Peck) on their small farm. Jody is a good kid, but a dreamer. His father indulges his drifting nature in opposition to his own strict upbringing. His mother is more rigid; she loves him, but the death of three infant children before him (cut down from six in the novel) makes her reluctant to bond with him and be hurt again should he meet a similar fate.
While the family struggles to survive the damage to their livelihood caused by a bear, thieving neighbors, a flood, and even the titular deer that Jody takes in as a pet, they are always hopeful for better times. Penny is especially optimistic, looking to an extra crop to raise money for a well or arranging the sly trade of a dog for a new rifle so that he can provide for his family in the way he desires.
The strict mother type is rarely understood in these kinds of stories, but here the grieving Orry is treated with empathy and compassion. Rather than being angered by her coldness, Jody tries to determine why she is this way. Penny encourages his thoughtfulness, describing the more carefree woman he married, and why he is devoted to her happiness.
As Penny, Gregory Peck is looser than usual. Something about the role seems to have touched him as he appears genuinely in tune with the hopeful spirit of the character. In a difficult part, Wyman subtly balances the hard shell Orry has formed around herself for protection with those moments when her warmth and love for her family slip out.
Jarman’s Jody is one of the great classic child performances. He’s as gangling and wobbly as the fawn he adopts, but there’s profound wonder and intelligence in his eyes. His emotional engagement is of a depth beyond his years.
While this family unit is the focus of the story, there are plenty of fascinating characters in the mix. The shifty Forrester family is fully of tricky personalities, with the tousle-haired Chill Wills a stand-out as Buck. Donn Gift is especially moving and intriguingly eccentric as the crippled Forrester son Fodderwing, Jody’s only friend. The always welcome Henry Travers (It’s a Wonderful Life [1946]) also shows up in a small part.
Iconic cinematographer Charles Rosher (Sunrise [1927]) creates a poetically beautiful milieu, using matte backdrops and paintings to magnificent effect. He manages to seamlessly integrate the studio and location settings so that he captures the grandeur of nature, but also the intimacy of the family’s life together. The film is also beautifully lit, especially in interior scenes where the warmth of the fire and candlelight lend the actors a dreamy glow.
The Yearling was rightfully a popular and critical success. It received significant awards attention, including Oscar wins for cinematography and art direction. Claude Jarman Jr. won a special juvenile award for his performance as well.
Special features on the disc include a radio production of The Yearling, the hilarious Tom and Jerry cartoon Cat Concerto, and a theatrical trailer.
Many thanks to Warner Archive for providing a copy of the film for review.
Posted by KC No comments: 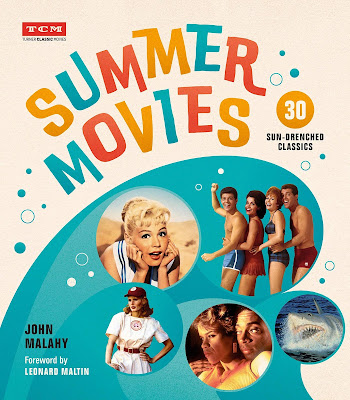 What makes a summer movie? It’s more than sun and sand. I talked with John Malahy of TCM about his book, Summer Movies: 30 Sun-Drenched Classics and we unpacked the many ways the season of vacations and warm weather can come alive in the movies.
You can listen here at Anchor.
The show is also available on Spotify, PocketCasts, Breaker, and Radio Public.
To learn more about the book, go to Running Press.
John also discussed movies from the book on TCM:
Moon Over Miami (1941)
Gidget (1959) 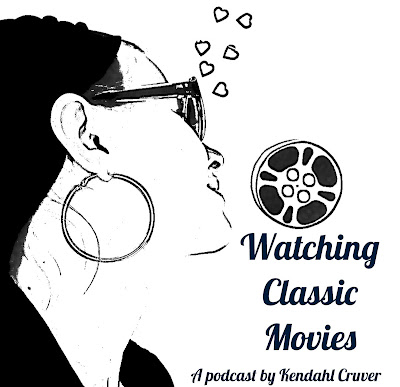