What Would Audrey Have Thought About that $4 Million Bid? 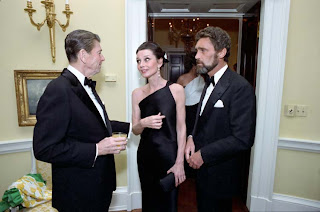 Thanks to a link from Clara of Via Margutta 51, I managed to catch part of the Debbie Reynolds movie memorabilia auction last night. It was a fascinating, if sad event and it was interesting to see what collectors where willing to pay for random things like Charlton Heston’s rags from the prison scene in Planet of the Apes (thousands of dollars for what looks like a torn burlap bag?).

I missed most of the really big items, like Marilyn Monroe’s white dress from The Seven Year Itch, but I did see the auction of Audrey Hepburn’s white lace dress from the race scene in My Fair Lady. I expected the gown to make a lot of money, but I was stunned to see the figure rise to nearly four million dollars. At first, I found that high bid exciting. I thought it was nice to see a piece of movie history valued that much. I also felt happy that Debbie Reynolds would be making some much needed money off the piece to pay off her debt. Then I thought of Audrey Hepburn.

What would Audrey have thought about that multi-million dollar bid? She saw so much poverty and suffering in her work as a UNICEF ambassador. Part of the reason the plight of these people touched her so deeply, was that she had suffered herself during World War II, and it was that kind of aid that helped to save her life.

Four million dollars could save a lot of lives. Would it have bothered Audrey that it went towards a bit of fabric and ribbon made valuable simply because she wore it so charmingly?

Here’s more information about the auction:

I hope it was a relief for Debbie Reynolds to get some of that weight off her shoulders. I’m grateful to her for going to so much effort to preserve these important pieces of movie history. Despite what I have written about Audrey and her dress, I do appreciate that there are so many who value these pieces, for whatever reason, and who will continue to preserve them.