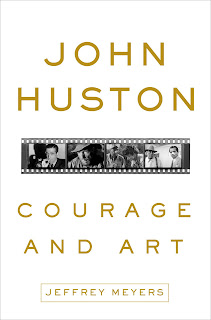 John gets bored easily. He needs new people to feed on all the time. The desert is littered with their bones. –wartime colleague Jules Buck


For Huston, life was a big game and he played it to the fullest. -ex-wife Evelyn Keyes

Though he was most famous for the movies which he wrote, directed and acted in, film was not the center of John Huston’s life. It certainly fit in well though. He was a storyteller, and the medium gave him a great vehicle to express his love for the arts and tall tales.

After suffering through the confinement of childhood illness, Huston jumped into life. He lived for adventure, traveling all over the world, taking wives and lovers as he pleased and frequently buying or gambling himself into debt. For most of his life, he seemed to live in fear of being bored.

Though he enjoyed his work and did it well that boredom would often plague Huston on his movie sets. For every masterpiece he created, and some of them were among the best movies ever made, there were films which he did to pay off his debts. He’d get to a certain point in production and decide it wasn’t worth the effort to fix a bad script or put an extra bit of polish on his work.

Huston could be both remarkably kind, and cruel to the point of being frightening. Several movie careers, from that of Satyajit Ray to his own daughter Anjelica Huston flourished because of his assistance. In a particularly touching story shared in the book, he flew the seriously ill Carson McCullers to his estate in Ireland and distracted her from her pain with conversation and generous attention. On the other hand, his older children feared him, and many of the actors he worked with wondered if they would survive the dangerous requests of their demanding director.

Though Huston left discarded women and other broken souls in his wake, he seemed to feel few regrets. The intensity of his personality inspired lifelong devotion, particularly from secretaries and former lovers, between which there was often no difference. Despite this, many people have noted that he was often remote and seemed unable to make a significant emotional connection. 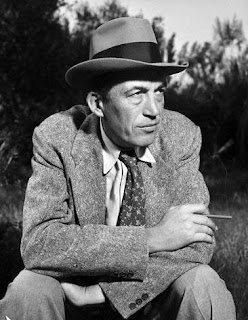 In John Huston: Courage and Art, Jeffrey Meyers gracefully manages these extremes. He balances his story nicely between the personal and professional and the result is entertaining and informative. It is obvious that a lot of research has gone into the book. The number of interviews Meyers conducted alone is astonishing. He talks to family, ex-wives, former co-workers and lovers, and for the most part all seem candid and fair, no matter what trials Huston put them through. The result is a portrait that captures the magnetic appeal of Huston, while holding him accountable for his faults.

The book aims for a comprehensive view of Huston’s life and since there is so much to tell, his films are not the core of the story. It does however provide a fascinating review of his career, with lots of interesting anecdotes from those who worked with him. Though making movies was meaningful to Huston, and he approached much of his work with care and intelligence, there was so much else that attracted him that sometimes they just paid the bills.

Unless you’ve seen all of Huston’s films, there are spoilers sprinkled like little land mines throughout the book which may cause some disappointment. I also found the prologue, which juxtaposed Huston and Ernest Hemingway bizarre, though interesting and well written. It wasn’t as if the comparison wasn’t apt; I could see and appreciate the connection between the two men. I only thought the piece would be more suitable as a separate essay than as the introduction to a biography.

These are minor issues though. Courage and Art is an exciting book which reads as effortlessly as an adventure novel. It captures Huston and his lavish and unpredictable world in great detail. Meyers has written several other books, and his skill and experience are evident.

Though I couldn’t tell from my own perspective, I believe that this book could be an engrossing read even for people who know little of classic Hollywood, Huston or his movies. Above all else, it is the story of a vibrant, complex man who made a unique impression as both a public and private figure.

Thank you to Random House/ Crown Archetype for sending this wonderful book for review.

Here's an interesting clip about life in Huston's Irish estate, where he lived for many years and which is described in great detail in the book: