Review--Mary Pickford: Queen of the Movies

Mary Pickford: Queen of the Movies
Edited by Christel Schmidt
University Press of Kentucky/Library of Congress, 2012

Mary Pickford was a pioneer on so many fronts in the film world that you could almost give up attempting to catalog her accomplishments. She was an actor, producer and businesswoman, among many other things, but perhaps the most significant thing about her is that she was the first international movie star. The industry thrives today because she found and captivated its audience.

While she deserves Chaplin-levels of reverence, Pickford has had an image problem for years. She has been strangled by her flowing curls--trapped by her little girl dresses. The woman who developed naturalistic screen acting and played everyone from Madame Butterfly to a French showgirl still lives in public memory as a sentimental relic of the past. 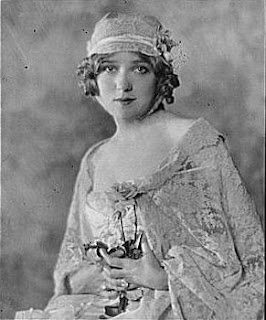 It's gotten better though. There have been excellent books, documentaries and DVD releases of Pickford's films in recent years. Her work can now be accessed easily. We can see that Little Mary was about more than kiddie roles, and that those child parts were a marvel in themselves and not to be dismissed.

Queen of the Movies is an important addition to these works. It pulls apart the pieces of her legacy to give them a deeper analysis, and then puts them back together again to demonstrate the nearly unfathomable influence Pickford had on the industry. It works as an introduction to her life and work, but having read every book I could about America's Sweetheart for my blogathon in her honor, I still found plenty of fascinating revelations.

Schmidt has collected both new and previously-published essays from some of the most highly-esteemed Pickford experts of the past and present, including biographer Eileen Whitfield, legendary film historian Kevin Brownlow and Robert Cushman, who was photograph curator for the Margaret Herrick Library from 1972 until his death in 2009. They cover a lot of ground, moving among the professional and personal aspects of Pickford's life. There's an essay about her famous curls and photos of her costumes, in addition to more complex pieces about her films and early life.

And there are pretty pictures. Film stills, portraits, posters and pages of Pickford's costumes in color. These images were so beautiful that I kept touching the page--like I could feel the beading on those fancy dresses. 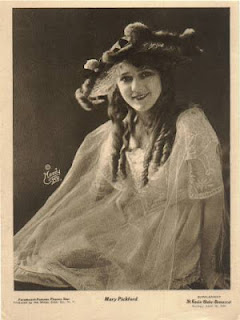 I also liked the mix of new material and previously-published essays. It was fascinating to compare literary critic Edward Wagenknecht's 1960s perspective on Pickford with more recent views from Whitfield and Schmidt herself. I didn't realize that the fight to save the reputation of America's Sweetheart had been waged for so long. Film historians have been trying to educate a misled public for decades.

While I found it interesting that an essay about race and the films of Mary Pickford was included in the book, it was a weak spot for me. It stood out because it didn't seem as indispensable as the rest of the material covered. Still, I appreciated that the topic was covered, as I don't think it is widely known that Pickford played roles in so many nationalities: Japanese, Native American and Indian among them. I have to admit that I don't know what would have made this section more satisfying.

I've got to talk about the physical book too, because reading it was almost a sensual experience. Yes, dramatic, but I always feel a sense of awe when I read a book as carefully put together as this one. While eBooks have their good points, here is a strong argument for keeping print alive. Everything about Queen of the Movies is gorgeous, from the alternating white and tan pages to those beautifully-reproduced images. Even the drop caps are rendered in elegantly-coordinated colors. I felt the presentation in itself was a show of great respect to this mighty woman.

Thank you to the University Press of Kentucky for providing a review copy of the book.
Posted by KC