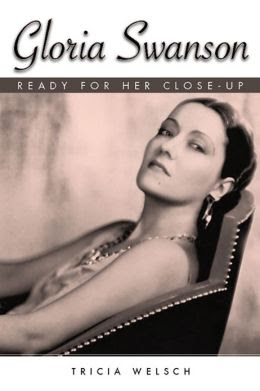 Her career is so unique, so extraordinary, that trying to condense it would be like trying to write War and Peace on the head of a pin.

That Gloria Swanson was a movie star is clear to many, even those who care nothing about classic movies. Her career-defining role as Norma Desmond in Sunset Blvd. (1950) was so potent that it became bigger than cinema and leaked permanently into our culture. And yet, this is the only Swanson film I have seen. As much as I loved her as the batty movie queen striving for a comeback, it didn't make me want to see more of her work. It was as if she was so good that I couldn't picture her being anyone else.

The same thing happened with audiences who assumed that the fading, desperate Desmond was an autobiographical portrait of Swanson. There were some parallels, but not nearly as many as legend would have it. Gloria Swanson may have struggled, but she never faded away, and in Ready for Her Close-Up, we meet a resilient, multi-talented woman with an insatiable appetite for life.

When I say multi-talented, I mean it. In addition to winning worldwide acclaim as a beloved comedic and dramatic actress, Swanson dabbled in sculpting, painting, journalism, engineering, inventing, singing and fashion design. She enjoyed success in all of these areas, and could have made her name in any of them, but the movies paid the most, an important consideration for an extravagant woman. When film roles weren't available, she could still find work in entertainment, on radio, television and on the stage from summer stock to Broadway.

Close-Up covers Gloria's epic life from her childhood as a mini fashion plate, where her mother would take pains to dress her in distinctive bows and hand-dyed leather shoes, to her busy later years as a health activist, artist and variety and talk show staple. It's a lot to take in, but Welsch has drawn rich content from her exploration of archives, including unpublished versions of Swanson's autobiography and the star's recorded notes about her life. She also gathered valuable insights from Swanson's daughter, Michelle Farmer Amon.

By the time Swanson left her teen years, she had already appeared in numerous films, married and left her first husband Wallace Beery and endured an unwanted abortion. Though I've never heard a pleasant story about Beery, I was still shocked by how horrible he was to his young bride. It was just the first of many ill-advised romances and marriages. Her personal and business relationship with Joseph Kennedy left her struggling with finances for several years, while her marriage to the childish, alcoholic Michael Farmer gave her unborn child with him a name and little else. Her marriage to the Frenchman Henri de la Falaise is the perfect example of the star's romanticism: impulsive, passionate, but rarely able to survive her high standards and the pressures of her fame.

Swanson's high standards extended to her work and lifestyle. On the set, she would fight for the highest quality in everything, a trait which would make her already difficult work as a producer/star with United Artists extremely grueling. As a mother, she insisted on breastfeeding her children, going against the norms of the time. When the worn down star had an encounter with a doctor who encouraged her to adopt diet heavy on the vegetables, she became devoted to organic foods. That and her fight to ban harmful pesticides used in commercial crops made her seem eccentric when she was alive, though it is clear now that she was decades ahead of her time. At 81, she had the glowing skin and fast reflexes of a woman twenty if not thirty years younger.

Welsch manages the complicated task of revealing these and many other facets of Swanson's life with a strong sense of balance. Her brilliance, talent, grandeur and extravagance are all explored in detail. She reveals a warm-hearted woman who could also be cruel. A star with a democratic demeanor on set who could also put on airs. She was complicated, and perhaps that's what kept the public continually fascinated with her, whether she could find a movie role or not.

One area that was not clear to me was Swanson's late life work. I know that she struggled financially for many years, but I could not tell if it was to the end of her life. It seemed that part of the reason she could not settle into retirement was that she was unable to be inactive, however much her schedule wore her down. I wasn't sure if her finances also played a role in those final years. Whatever the case may have been, she seemed to be a woman meant for action, and she certainly fulfilled that destiny, right to the end.


All photos are from Wikimedia Commons.

Many thanks to University Press of Mississippi for providing a copy of the book for review.
Posted by KC