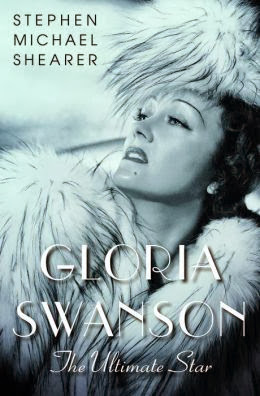 Gloria Swanson's fame was explosive in a way that is not even possible in today's fragmented media environment. It's difficult to comprehend the full measure of her impact in a world before television, internet and the myriad other distractions of modern life. She was one of only a few people in her time who attracted worldwide adoration.

Fans followed her every move. She was swarmed with crowds wherever she went, in the States and abroad. They copied her hairstyles, clothing and mannerisms, eager to capture a piece of her lavish life. She wasn't the first movie star, but she was the first to embody the persona of a glamorous screen goddess, and she played that role with so much gusto that she lost a fortune and spent years attempting to dig herself out of debt.

It's difficult to get a sense of how much adulation Swanson inspired when her biographer is constantly making digs at her, as in The Ultimate Star. Occasionally you'll catch an appreciation of her style, enduring talent, versatility and generosity. Unfortunately, those moments are offset with several negative, personal comments about the star.

There are certain things you can expect in the life story of an actor: they are often narcissists; sometimes they put on airs; usually marriage and parenthood suffer for the glory of their craft. These less attractive elements belong in any decent biography; they are necessary for a full understanding of the subject. Shearer gets to the bottom of many of Swanson's dubious claims about her life, several from her autobiography. Often, she was trying to save face. Other times she was more ruthless, such as when she claimed a dress made for her by a designer was her own creation. She could be horrid and self-absorbed.

Still, even unsavory characters can be treated with a certain amount of respect, despite their flaws and especially when they are as complicated as Swanson. Things like Shearer's comments about how the star "prattled on" in an interview or even about how a certain costume hue was "never a flattering color choice" run throughout the narrative and give the story an excessively bitter feel.

Tone aside, the book could have used a more vigorous edit. Awkward phrasing often interrupts the flow of the text. Odd wording like how a critic "painfully wrote" a bad review had me scratching my head.

The Ultimate Star is full of detail and I found lots of enjoyable tidbits, though I wondered if anyone would want to know that Swanson received a "1956 desk calendar from Charles and Lillian Brackett" for a Christmas gift one year. I guess there's got to be someone out there.

This is an passable review of Swanson's life, I'm sure there will be people who adore it, but I think she deserves better.

Thank you to Thomas Dunne Books/St. Martin's Press for providing a copy of the book for review.