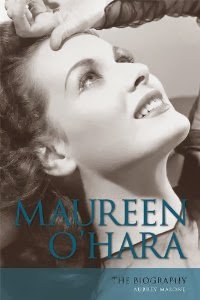 Maureen O'Hara didn't drink or smoke. She would never go out on the town to raise hell or have affairs with her costars. The actress was wholesome onscreen and off, which made me wonder if I'd have any interest in her life story. Well, I should have had more faith in wholesome, because she is plenty fascinating, though all told, there isn't all that much to say about this Irish American star. Stretched to slightly more than two hundred pages with lengthy plot and production descriptions of her less significant films, Malone's biography can feel slightly padded, but there is enough intrigue here to attract even a casual O'Hara fan.

Born into a happy, supportive family in Dublin, O'Hara had a comfortable childhood. When she drifted into drama as a teenager, her father made the typical parental plea that she study bookkeeping as a back-up, but stage work led to bit parts in films and she quickly found herself firmly in the spotlight. She charmed Charles Laughton, who signed her to a personal contract and took her on as both a protégée and the daughter he never had. They appeared together in Alfred Hitchcock's Jamaica Inn (1939), which got negative reviews, but won O'Hara some admiration.

When Laughton set off for Los Angeles later that year to star in films for RKO, he took his nineteen-year-old discovery with him. In a later interview, O'Hara emphasized that she didn't go to Hollywood, she was brought there. In the beginning it was almost too easy for her, and perhaps she set herself up for disappointment. Her first US role was opposite Laughton in an instant classic, The Hunchback of Notre Dame (1939). The path to decent parts would rarely be so smooth again.

Despite the many mediocre roles that frustrated O'Hara throughout her career, her filmography has plenty of distinguished titles and variety. She was a hit in several swashbucklers opposite heartthrobs like Tyrone Power, Errol Flynn and Douglas Fairbanks. Though she seemed to enjoy these lightweight action flicks, she was put to better use in classics like How Green Was My Valley (1941), Miracle on 34th Street (1947) and The Quiet Man (1952). Acting wasn't an all-encompassing passion for her, but she fought for quality roles and took pride in her talent.

Much of her legend is due to the many films she made with grumpy genius John Ford. O'Hara had a complicated relationship with the director. Malone devotes a lot of attention his bizarre behavior with the actress, from sending her love notes that he never followed up with passes, to his randomly doodling penises on a piece of paper in front of her. He alternated between love and hate with many, John Wayne took some of his worst abuse, but he seems to have acted with particular intensity towards O'Hara. Day speculates that this is perhaps because of Ford's desire to have been born in Ireland, and what she represented to him as an Irishwoman. This seems logical given his lifelong obsession with his parent's homeland.

While O'Hara alternated between fearing and appreciating Ford, for the most part she could stand up for herself. There was no casting couch for this Irish lass. When married director John Farrow attempted to punish her for resisting his advances, she put him in his place with a sock to the jaw. She cracked a hand bone trying to hit Wayne for real while acting in a scene on a day when he'd annoyed her. Wayne was quicker to protect himself that some of her other male co-stars.

Despite her strong will and quick temper, O'Hara could weaken to convention. Her marriage to alcoholic and abusive dialogue director Will Price lasted over ten years, though he made it clear early on that he only wanted to marry into a life of luxury. The actress could not face revealing her failure to her public and distracted herself with work. Her one gift from the union: daughter Bronwyn, whom she doted on with a devotion rare among movie stars.

Be it a rotten husband, a bad investment or a string of lousy roles, O'Hara seems to have been just as determined as a lot of her fiesty characters. She ultimately triumphs professionally and personally, even finding true love. Her no-nonsense spirit, enduring loyalty to friends like Wayne and ability to speak her mind in a highly quotable manner keep this biography of a squeaky clean lady lively (though I found the excessive use of parentheses distracting--yes, I'm aware of the irony here). Malone writes with good humor and properly in the spirit of his subject.


Deepest thanks to University Press of Kentucky for providing a review copy of the book.