Book Review--The Wizard of Oz FAQ: All That's Left to Know About Life According to Oz 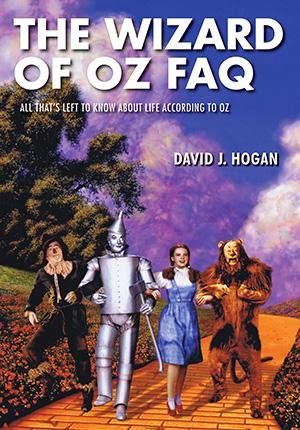 The Wizard of Oz FAQ: All That's Left to Know About Life According to Oz
David J. Hogan
Applause Theatre & Cinema, 2014

The title The Wizard of Oz FAQ doesn't quite accurately describe its contents. Rather than simply providing the answer to frequently asked questions about the monstrously popular Oz, it attempts to cover its entire universe, with varying success. It starts with the books written by Frank L. Baum and continues beyond the production of the 1939 film to its overall effect on the culture at large. It doesn't add up to a cohesive whole, but there are lots of fascinating tidbits in its 400 pages.

The book's biggest problem is that it lacks flow. This is primarily due to the many side trips it takes for biographical sketches, additional information about elements of the main text and other assorted trivia. Sometimes these asides are interesting, but for the most part they feel unnecessary and weigh down the narrative.

I found the profiles especially draggy; particularly those of peripheral players like the original tin woodsman Buddy Ebsen, who had little to do with the final film. It wasn't necessary to get a full career overview of an actor whose voice would be heard in a few songs, or of other cast and crew members who would have little to do with the final product. These sections take focus away from the film, rather than increasing interest in its background.

It was interesting to learn about the different influences on the production of The Wizard of Oz. This was the rare film directed and written by committee that turned out well. Its multiple creative influencers shaped the look and feel of the production in several ways, occasionally going in strange directions. Director George Cukor served briefly as a consultant on the film and his suggestion to tone down Garland's doll-like Dorothy make-up and hair so that they would better suit a Kansas farm girl surely did much to solidify the film's legacy. The script was also similarly streamlined, and saved from being dated with the removal of a scene where the characters are attacked by "Jitterbugs" while singing a tune that was very much of its time.

I also enjoyed learning about the many details that made up a production of this size. How many banks of hot arc lights, munchkins, backdrops and carefully constructed costumes it took to make it all look effortless. Some of the trivia is enjoyably odd, like that Terry, the terrier who played Toto, had to have an enema every morning so that he wouldn't leave any deposits on the yellow brick road.

There's a lot more information here about The Wizard of Oz than I wanted to know, probably more than most people would want to know. It's not an enjoyable cover-to-cover read. However, the book is structured so that it is easy to pick and choose from different elements, from the history of Oz overall to specific areas like costumes and music. It covers so much ground that it's bound to have something to please any Oz fan, and for readers who want to totally geek out on the subject, it's a bonanza.

Many thanks to Applause Books for providing a copy of the book for review.
Posted by KC