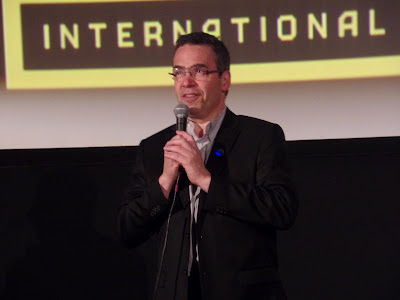 When you think of a producer expert in film preservation and restoration, the image of an entertainer does not come to mind, but that is exactly what Serge Bromberg is.

He has made a career of digging through flea markets, attics and the like to find films that would otherwise be lost and forgotten and bringing them to an audience again. According to the SIFF website, his collection of nitrate film has about 120,000 reels. His Paris production company Lobster Films has restored and released collections celebrating the work of pioneering artists like Méliès, Chaplin and Charley Chase.

Last Tuesday, which was coincidentally the thirtieth anniversary of Lobster, Bromberg presented a fascinating program of film shorts, many of which he accompanied himself on the piano, called Saved From the Flames - A Trip to the Moon and Other Trips Through Time and Space. The charismatic Frenchman totally captivated the crowd. He is the kind of person who could tell you the most horrid thing in the world and you would find him utterly charming.

Bromberg talked about his work finding lost reels. He said his goal has always been, "finding those films, restore them and show them." Then he grinned at the audience and said, "and a lot of those films are bad." Fortunately, he spared us the duds.

One of the most popular aspects of Bromberg's presentations is his demonstration of the extreme flammability of nitrate film. I'd seen lots of photos and videos online of him setting a strip ablaze, with the tiny strip disappearing in a flash. I was so excited to see this in person that I could barely take photos, but I did get a couple of decent shots.


Here Bromberg lights, or rather attempts to light a piece of modern safety film to show how difficult it is to burn: 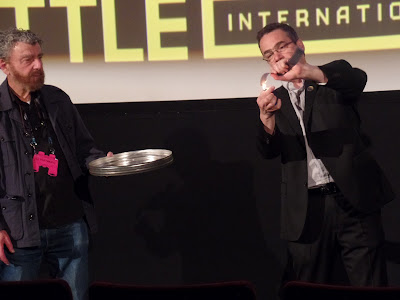 Then he lights the nitrate! 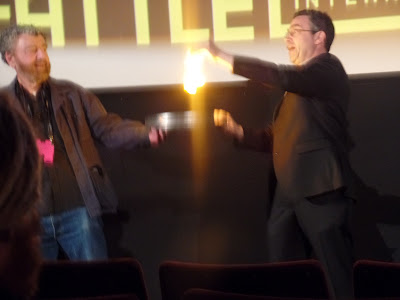 It was an exciting way to begin the program.

Then Bromberg settled into MC mode, providing a description of each film with historical context, bits of information about the format and tinting and often an amusing fact or two about the short.

I have shared full videos or clips of the films where available to give an idea of how the evening unfolded, but keep in mind that these do not all have the tinting or soundtrack as experienced in the theater.

A camera attached to a streetcar records ten minutes of life on a busy San Francisco street. Capturing the chaos of early car traffic, curious kids who seem to already know how to ham it up for the camera and a life that seems much simpler and more innocent, it is a film that has become more valuable with time. It is also a bit difficult to watch knowing that it was made three days before the earthquake that devastated the city.


San Francisco After the Disaster (1906)

This two minute Pathe film shows the damage after the quake. While it was difficult to watch, I found these first two shorts to be a fascinating pairing.

The Metamorphosis of the Caterpillar (1904)

Educational movies are as old as cinema itself, as can be seen in this color-tinted demonstration of a caterpillar transforming into a butterfly. The punchline: instead of a real butterfly, the rapidly flapping wings are simply the costume of a showgirl who reveals herself in the final moments.

I'd seen this bizarre three-minute clip before, and it was even more odd to watch on the big screen. It is essentially a fly, sometimes with a partner, manipulating different objects while apparently pinned in place.

Keeping with the insect theme, this amusing short tells the story of a group of butterflies who take revenge on the enthusiasts who attempt to capture them. In one shocking moment, a collector is pinned to a stump, just to get a taste of his own medicine. This lovely film was hand colored using a stencil process.

The title just about says it all. A well dressed lady and gentleman do flirt in a train compartment, but a meaningful quick cut which then goes back to the couple rearranging their clothes indicates that a lot more than flirting was happening between them.

This Pathe travelogue of the Indian city of Gwalior was one of my favorites on the program. I loved getting a glimpse of the people and way of life in this growing metropolis, which was at the time still under British rule.

The astonishing feats of this team of so-called Japanese acrobats are the result of obvious trickery, but that doesn't make this amusing film any less entertaining.

One of the few sound films on the program, this hilarious German short features an actor lip synching to a Enrico Caruso recording. I didn't manage to get the full name down, and I really wish I would have, because this was one of my favorites.The humor in it is that it is a painfully awkward performance. Our pretend singer moves chairs and bottles around with forced nonchalance, never looking directly into the camera and becoming even more awkward when the song ends and he doesn't know what to do with himself. Apparently exhibitors could dupe audiences into thinking this was a Caruso film by saying it contained his music.

I loved that Bromberg showed this delightfully surreal cartoon about a land of balloon people and the Pin Cushion Man who menaces them. It's hard to describe the thrill of seeing  a well-made 'toon in a theater. After hours of watching them on TV, being able to see one in that much detail is an almost overwhelming experience.

This was a lovely restored version of Buster Keaton's last silent short. While it was necessary to use a few less than satisfactory pieces to complete the restoration, the overall result is beautiful and it's a really funny film.

I love this groundbreaking George Méliès film, clearly--just look at my banner, but I can't recall ever finding it more entertaining than I did for this screening, in which Bromberg read the original narration with verve and great humor. Having taken the lead on a decade-long restoration of the color-tinted version of the film himself, Bromberg clearly has deep feeling for the film, and it showed in his performance. Rather than using the new soundtrack by the French band Air, he chose the more traditional Robert Israel score, which I felt suited the tone of the program.

While we had all been told the program would be over after A Trip to the Moon, Bromberg had a surprise for us. He stayed at his place in front of the screen and narrated this early animation film featuring a very obedient dinosaur. I've always found the movie a bit boring, but it was impossible not to enjoy Bromberg's high-spirited performance, which included a whip and a icebox watermelon as props.

It was an amazing evening, mostly due to Bromberg, who knew exactly how to please his audience. If you ever get the chance to see one of his presentations, grab it, and get ready for a memorable performance and brilliantly curated films. 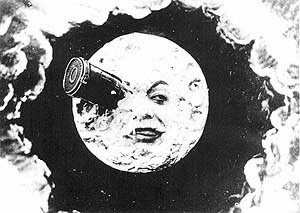