Book Review--I Lost it at the Video Store: A Filmmakers' Oral History of a Vanished Era 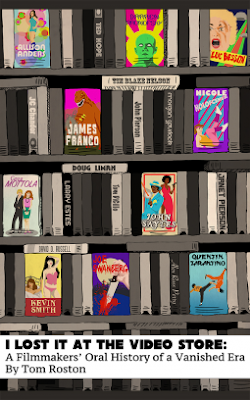 I Lost it at the Video Store: A Filmmakers' Oral History of a Vanished Era
Tom Roston
The Critical Press, 2015

What video stores and the proliferation of videos did was to democratize access to movies and film history.
-Tim Blake Nelson

There were once video stores I'd gone to so often that I'd memorized the way each row of cassettes looked, permanently associating those particular images with the films inside. When I didn't show up on Two-For-One Tuesday one week at the store I frequented in college, the lady at the counter told me she'd been worried and wondered if she should check up on me. In those days, it never occurred to me that there'd be a time when I didn't have my choice of brick-and-mortar rental places.

As it turns out, the lifespan of the video store would be relatively short--ranging from about 1980 to 2005. In I Lost it at the Video Store: A Filmmakers' Oral History of a Vanished Era, journalist Tom Roston explores that brief history and gets the perspective of several filmmakers, many of them former video store clerks, who share their experiences in the age of VHS. The interviews are arranged by subject, giving it the feel of a round table discussion though each person spoke with Roston individually.

Of the twenty-three interviewees, most are directors, with a sprinkling of producers and film executives. Many of them are independent filmmakers who made their names during the heyday of the video store, and often because of it as well. Allison Anders, Kevin Smith and Quentin Tarantino speak of their early fascination with the idea of renting films and how suddenly it became an option when before they had had so little control over what they saw and when.

These directors, and other independent mavericks like Nicole Holofcener, Doug Liman and John Sayles touch on both the emotional and practical aspects of the video age; they're as likely to talk about the impact of images on VHS boxes or the smell of the carpet in a favorite store as they are the education in film they received one rental at a time. The biggest thrill: having directed enough films to have your own director section in the store you frequent.

I found it interesting that younger filmmakers like Morgan Spurlock and Joe Swanberg were more open to streaming, and the latter despite the fact that he worked as a video store clerk. Though many of the more established directors have seen different cycles in the consumption of film, from the weakening of the theater experience in the face of video to the decline of VHS and DVD as streaming gained in popularity, they seem the most resistant to the loss of brick and mortar stores.

One of the most amusing aspects of the book is the way Tarantino and Smith's interviews are juxtaposed in such a way that they appear to be having a debate about the way films should be viewed. Smith loves both video stores and streaming and confesses that his addiction to film is so intense that he will watch a movie on a phone to get his cinema fix. On the other hand, Tarantino refuses to watch a movie on his computer and prefers to have physical copies of films, so much so that he bought the entire stock of the independent store Video Archive when it went out of business.

There's also some space devoted to the rise of corporate video stores, which may have hastened the decline of the whole business by killing so many mom and pop rental spots. These corporations had the money and volume of purchase necessary to cut deals with the studios, making it easier to profit. The rise of these companies led to a dip in film variety and quality, which has continued in many respects in the age of streaming.

The interviewees are for the most part white males, with a few important female voices included. I found myself curious to get the viewpoint of filmmakers of other races, such as Spike Lee, Gregg Araki, John Singleton and Robert Townsend. Perspectives like these would have brought an interesting dimension to the book.

I Lost It At The Video Store is a quick, fascinating read, consumable in an afternoon, but substantial. It gives equal attention to cultural and business matters and offers a lot of food for thought as we, to paraphrase Smith, leave behind the anticipation of video and embrace the instant gratification of streaming.

Many thanks to The Critical Press for providing a copy of the book for review.