On DVD: The Tricky Racial Issues of General Spanky (1936) 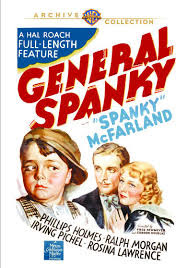 While Our Gang comedies may not be thought of as only appropriate for children's entertainment, we do tend to view them as a family friendly option. Whether that is actually so depends on what you watch and what kinds of conversations you want to have with your kids.

If you want to see the Gang in something lighthearted and uncomplicated, you'll need to do some vetting, and decide which titles you are prepared to show younger children.  However, if you want to start a conversation with kids about racism and how it is portrayed in our culture, something like the full-length General Spanky, now available from Warner Archive, could be an interesting part of their social education.

And there's no chance you are going to be able to avoid the issue watching General Spanky. We're not talking about a couple of blackface scenes, or the odd shot of terrified children of color darting away from a skeleton. The whole movie is filled with happy slaves, singing as they toil on the docks, sternly telling the baffled Buckwheat to go find his master, and showing no ill will at all about being a white man's property. Here a child cheerfully agrees to become a slave for the adult protagonist of the film, who is equally cheerful when he admits he owns several other slaves.

It's a confusing experience to watch this movie, because Spanky is one of the most charismatic actors to grace the silver screen. In my mind, among the Gang members he's only second to Stymie, who was also blessed with a highly unusual comic timing. You want to sit back and enjoy Spanky's precocious ways and the confidence with which he faces the world. And he somehow manages to pretty much keep his innocence here.

Sure Spanky volunteers Buckwheat for slavery, but only because he wants his friend to have a warm bed and regular meals. He has no notion of the hateful ways of the men around him. He doesn't know any different.

Against the backdrop of the civil war, the aforementioned jolly slaves, and enough racist comments to twist your insides into bits, the Gang plays at its own war, and engages in familiar high-spirited hijinks. Spanky watches out for the suffering Buckwheat, Alfalfa sings perfectly and hilariously out of tune, and the kids do a better job solving complex issues than the grown ups around them. It's a well-made comedy, with its share of laughs, but you never have a chance to relax. There are vicious, horrid things happening beneath all that mischief.

I'm glad I saw General Spanky: for the chance to get some historical perspective, for the opportunity to think about the various racial issues of the past and how they fit into our overall history, and for a few moments, to laugh at the clever ways of the child actors, but it was an incredibly uncomfortable experience. I'm not ready to show it with my own kids, but I think it is a personal decision whether or not this film is appropriate to share with younger audiences. From a educational viewpoint, and especially given the conversations our society is currently having about race, it is definitely worthy of viewing and discussion.

Many thanks to Warner Archive for providing a copy of the film for review. This is a Manufacture on Demand (MOD) DVD. To order, visit The Warner Archive Collection.
Posted by KC