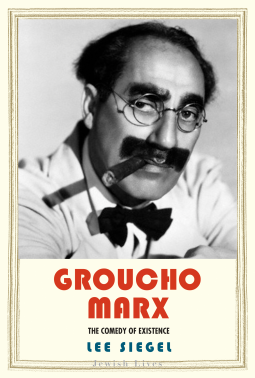 Though he made his name inspiring laughs, Groucho Marx's comedy was often more brutal than it was humorous. Witty yes, but with such a dark view of humanity that his wisecracks always feel like arrows whizzing past your skull. In his new career analysis of the most famous Marx brother, Lee Siegel explores the roots of the nihilism in his humor, from his Jewish faith and lack of a formal education to his profoundly different, and influential parents.

Siegel goes inside Groucho's early personal life in an attempt to weave those details into his public life. He does this not so much to uncover all the mysteries of the man, but to more deeply examine the nature of his comedy.

Though Groucho had ambitions to become a doctor,  he left school in his elementary years, and he'd always feel the need to prove himself among intellectuals, as is illustrated in the book via his uneasy relationship with T.S. Eliot. His Jewish faith and the Yiddish theater would affect his self-image and performance style as well.

Groucho's strong-willed mother Minnie also had much to do with his entry into show business, but his less potent father Frenchie was perhaps his greatest comic influence. According to Siegel, he was like many immigrant men who did not adjust to life in a new world with as much confidence as their wives. The elder Marx gave up on success, losing himself in endless pinochle games, and he was similarly lackluster as a family man.

The scorn that the brothers felt for their less than ambitious father is prominent in their comedy, where the weak are targeted as much as the strong. They lack respect for any kind of authority, whether it be over a great fortune or a peanut cart. The implication seeming to be that no one is up to the job they claim simply because they claim it.

That sort of misanthropic comedy wasn't always a surefire hit. Marx Brothers movies that are considered classics today, were not as beloved in the 1930s. In a 1960s appearance on the Dick Cavett show, Groucho could not recall receiving fan mail while he made movies, but with the revival of the Brothers' films thirty years later, he began receiving over one hundred letters a week.

While we do laugh at Groucho, it is an uneasy laugh, more of uncomfortable recognition than joy. His rebellion against social structures is what makes him eternally modern and more relevant as time passes, because that rejection of the norm is the signature of progress.

The Marx Brothers' style was a protest of sorts, wrapped up in chaos, but Groucho always stepped in to put a point on the action, jabbing it home with his cigar. It was as if he was justifying the madness, and insisting that it all made more sense than the status quo.

It is this man that Siegel reveals, a scornful, restless, self-educated intellectual whose world view ripens over the years more than it ages.

Many thanks to Yale University Press for providing a copy of the book for review.