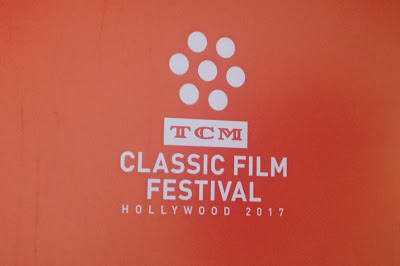 I always like to give a little extra attention to the special guests of TCM Classic Film Festival, because these are the people who have created, restored and promoted the movies that make the whole event possible in the first place. Moments with these stars of classic movie fandom are unique, and in the cozy, affectionate setting of TCMFF, more likely than not to be deeply satisfying.

Festival 2016 was nearly overwhelming in its star power. It was the year of the fascinating, multi-faceted movie queen, with guest appearances from Gina Lollobrigida, Angela Lansbury, Eva Marie Saint and for me the most astounding of all, Anna Karina.

This year I was a little less starstruck, but none the less fascinated by a group of filmmakers and cultural figures who have become as legendary for helping to preserve and promote classic films and stars as they have for their own works. I'll write more about these guests in my posts about the movies at TCMFF, but I wanted to first gather them together as a group to spotlight just how important their contributions to film history are. 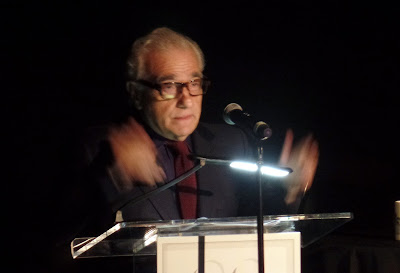 One of the great thrills of TCMFF 2017 was the last minute announcement that Martin Scorsese would be introducing the opening night nitrate screening of The Man Who Knew Too Much (1934). Geeks that we are, the first reaction for many of us was fear that we wouldn't be able to get in to check out the splendor of nitrate because of a rush of passholders eager to see the great director and advocate for film. But yes, we were all excited to see what the knowledgeable and passionate Scorsese would have to say.

It's no surprise that the director attended the festival, as his Film Foundation contributed funding to the Egyptian Theatre remodel, which included building facilities for projecting nitrate. As thrilling as it was to see this great man in the flesh, that feeling wore off fast as we collectively realized how thoroughly this man can geek out over formats. It was fun to hear him talk about his own experiences watching nitrate at revival screenings in the seventies. For those of us who were nitrate virgins Scorsese's description of the sensation of watching films on the highly-flammable stock was so tantalizing that we almost wished he'd let us get on with the film.

Getting a taste of the professorial side of Scorsese and soaking up his passion for film was a wonderful way to start the festival. 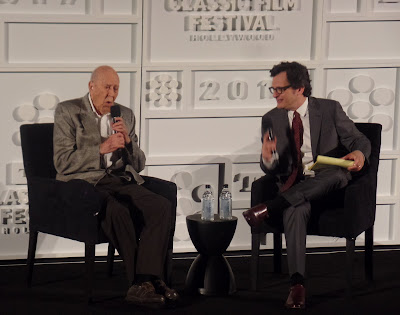 I was lucky to attend two of Carl Reiner's appearances at the festival. After spending a lovely morning soaking up his fatherly love for son Rob in the forecourt of the Chinese Theatre for their hand and footprint ceremony, the next day I enjoyed his amusing conversation with Ben Mankiewicz in the Theatre, before a screening of The Jerk (1979).

While the current political tensions in the US were alluded to by presenters several times throughout the festival, Reiner was the only one to speak bluntly and at length about the current administration. Perhaps he never cared what people thought about his political views, but at ninety-five, he truly seems to feel free to say whatever he wants. From what I heard, the audience was happy to play along.

The comedian also spoke at length about Steve Martin, who has had a turbulent life. As an extremely affectionate father himself, it seemed to truly hurt Reiner that the actor had had such cold, distant parents.

He also described many of the scenes from The Jerk in detail, almost more as if he were an enthusiastic fan. At first it seemed to me that he was going a bit too far with his long descriptions, and it seemed Mankiewicz was even trying to steer him in a different direction, but in the end I did appreciate this film, which I have seen many times, much more because of what he had to say. 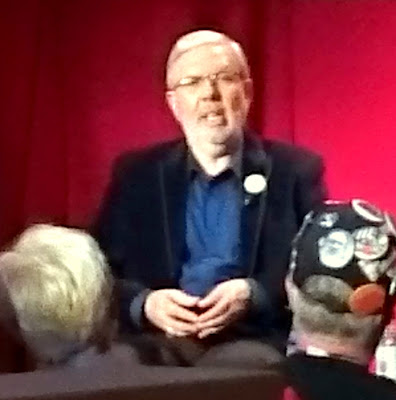 The last star film critic, Leonard Maltin has always been an essential part of TCMFF. I've enjoyed his presence at the four festivals that I have attended, partly because he always seems to be so delighted to be among film fans who adore the movies as much as he does. This year I didn't catch any of his film introductions, but did enjoy a Q&A he gave the last day of the festival in Club TCM.

As always, I was impressed by Maltin's enduring passion for his profession. He hasn't let what has surely been years of bad movies, in addition to the rare gems, make him cynical. Instead he remains clear-eyed in his views, interested in both cinema past and present (though he clearly leans towards the former) and eager to speak openly about cinema with his fans. The critic's charming daughter Jessi circulated in the crowd with a microphone, adding a word here and there in support of her father.

At this event I also finally had the chance to speak to Maltin myself, which was both thrilling and fascinating. 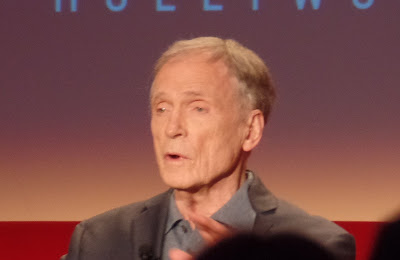 Of all talk shows, Dick Cavett's is the only one where I will watch episodes several times, as if I am enjoying a good piece of music. He's one of my favorite interviewers, smooth, well-prepared and funny and yet always with a bit of the star struck Nebraska boy in him. Cavett introduced Monkey Business (1931) and Way Out West (1937) at the festival. While I missed those screenings, I was able to catch his appearance at Club TCM on the last day of TCMFF.

At age 80, Cavett is still boyish, playful and full of amazing stories. With his shows, books and his column in the New York Times, he has done much to preserve the history of many important film personalities. In his conversation with Illeana Douglas, he discussed the high points of his career and the stars he encountered along the way. Afterwards he charmed a delighted group of fans at a signing for his latest book. All I've got to say is that selfies featuring this man's smiling mug are now featured on a lot of Facebook profile pics.


I love Peter Bogdanovich as much for his film scholarship as I do his movies. He has done so much to keep classic stars and directors visible while promoting their work to new generations. The director is also better than anyone at giving modern films the feel of a classic production.

I'd missed Bogdanovich's interview in Club TCM with Ben Mankiewicz (I hear it was the hit of the festival) and his introduction of The Last Picture Show (1971), so I was delighted to finally see him talk to entertainment journalist Dave Karger before a screening of What's Up Doc? (1972) at the Egyptian Theatre.

One thing I love about Bogdanovich is that while he's got this eternally dour look on his face, he's one of the funniest guys I've ever seen. He's so good at mining a story for humor that sometimes you fail to see the tension below the surface; the anxiety flowers into hilarity. Here he told several stories about Barbra Streisand and you could sense that it wasn't easy for the director to navigate her envy of Madeline Kahn (who was stealing the movie in her debut role), but he makes that friction seem light and funny.

I also love his star impressions. He is understandably famous for his Cary Grant and he does a pretty good Jimmy Stewart as well. That an unsmiling man in a neckerchief and dark glasses is performing his take on classic stars with such gusto makes it all even funnier. 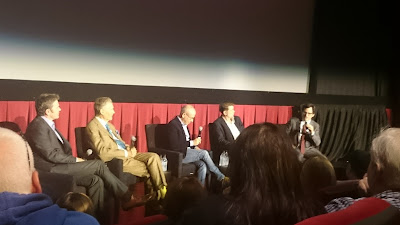 I never thought I would see a film from this century at the TCM Classic Film Festival, but anything directed by Christopher Guest is a must-see for me. The announcement that Bob Balaban, John Michael Higgins, Jim Piddock and Fred Willard would be attending a screening of Best in Show was incredibly exciting. Guest's mock documentaries are among the few newer films I own and I love the way the director uses a sort of repertory cast for his films à la Preston Sturges (see, I found a classic movie link after all).

Bob Balaban was the cast member I was most excited to see, so I was saddened to learn he had lost his voice, but amusingly enough I love him the most because of his silent reactions, especially in the Guest films. He had a stack of index cards and a pen, but for the most part could communicate just fine without them.

The rest of the guys, while they had not all appeared in scenes together, had great chemistry. I had expected a hilarious presentation, and while there were a lot of laughs, it was much more charming than anything else. It was fun to learn about how they worked together and clear that they held each other in high regard. There's definitely a vastly different energy level when you have a panel of big personalities like this together as opposed to a one-on-one interview.

Ben Mankiewicz oversaw the proceedings and made it all look a lot easier than it had to have been. In fact, I think the TCM host is underrated as an interviewer because he so often helps the conversation to flow in such a relaxed, natural way.

All photos property of A Classic Movie Blog
Posted by KC