Book Review--Seduced by Mrs. Robinson: How The Graduate Became the Touchstone of a Generation 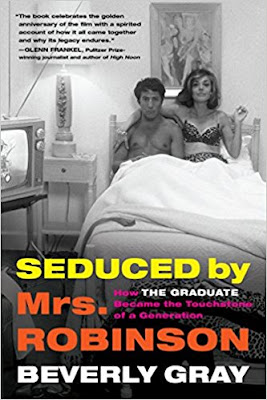 Seduced by Mrs. Robinson: How The Graduate Became the Touchstone of a Generation
Beverly Gray
Algonquin Books, 2017

I had a great time reading Seduced by Mrs. Robinson, a new book by Beverly Gray that traces the production of Director Mike Nichol’s classic film The Graduate (1967) on its 50th anniversary. Though I have heard stories about the making of this movie for years, in reading this lively history I’ve learned how much richer, entertaining and even touching the full story is.

Gray was a college student when the film was released and well understands the youthful angst that inspired her generation to embrace it. As a longtime part of the entertainment industry, including ten years working with Roger Corman, she brings industry savvy and connections to her story. In addition to looking at the film’s effect through her own lens, she explores that of other generations, mindsets and cultures.

The book is divided into three parts: a production history, plot rehash and analysis of the film’s effect on society. I most enjoyed the first part, which was full of behind-the-scenes tidbits, including the new-to-me fact that Eddra Gale, the quirky actress who played seaside temptress La Saraghina in Fellini’s 8 ½ (1963) made a 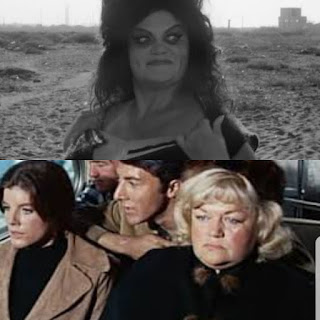 cameo appearance in a bus scene (not that bus scene), and that the filmmakers deemed her appearance significant enough to give her a credit. The blow-by-blow of the plot in the middle of the book felt unnecessary, though Gray does offer some interesting commentary. Objectively, the final section, with its expansive review of The Graduate phenomena and the impact it has had over the last five decades is the strongest and most thought provoking.

Gray writes in a lightly humorous tone, weaving a diverse array of facts and anecdotes into an airy, enjoyable read. It is for the most part an upbeat history, though there are some sober moments, including memories of Nichol's heartbreaking childhood and the way his feelings of being an outsider led him to choose the emphatically non-WASP Dustin Hoffman to play a privileged Californian loafer. For the most part it appears that The Graduate brought joy to most who were involved with the production in addition to being almost universally beloved among audiences.

Another bit of trivia about the cultural effect of The Graduate that amused me was learning about this commercial Dustin Hoffman made for Audi that riffs on the famous final scene of the movie. Meant for overseas audiences, it doesn’t make a lot of sense, but I thought it was sweet:


Many thanks to Algonquin Books for providing a copy of the book for review.
Posted by KC