On Blu-ray: Glamorous Mayhem in The Opposite Sex (1956) 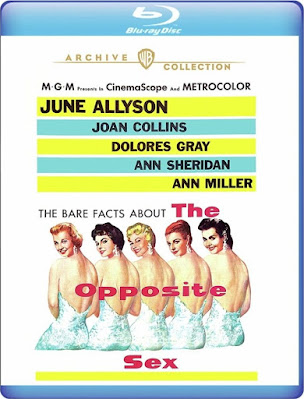 The first time I saw The Opposite Sex (1956), a musical remake of The Women (1939) I didn’t appreciate it. How could I when I compared it at every beat with one of the best films ever made? I had a much different experience when I watched the new Warner Archive Blu-ray release, because I saw it for its own bold, vibrant, nasty charms.

In this version of a story based on Clare Boothe Luce’s play, June Allyson plays a wronged housewife (married to the robotic Leslie Nielsen) and former singing star who loses her producer husband to a scheming showgirl (Joan Collins, sexy, but far from the magnificence of her Dynasty days). She learns about the insult via the machinations of her frenemy (Dolores Gray) and pulls herself out of misery with the help of her best friend (Ann Sheridan) and a wild social crowd including Ann Miller, Agnes Moorehead, and Joan Blondell.

The best moments are, unsurprisingly when the women are alone together, plotting, gossiping, drinking, and supporting each other through the mid-century challenges of being female. This is a stunning cast, full of big personalities that meld together miraculously. Though I hate the term “cat fight” and the way people snigger at women in physical fights, I have to admit that fisticuffs were central in my two favorite scenes: one where Allyson gets so steamed she slaps an earring off Collins and another where a kitchen at a Reno divorce ranch is obliterated in a massive, chaotic, glamorous and very entertaining battle among several cast members.

While the songs aren’t terribly memorable, and my own personal dislike of Allyson affected my perspective, the production numbers look great and hop along with bouncy energy. In a musical highlight, Dick Shawn makes a typically goofy and unhinged appearance singing the title tune in a sketch with Jim Backus as the perfect straight man. Gray lends her silky charm to a rendition of the same tune during the opening credits.

In essence, The Opposite Sex is an explosion of female charisma, glamorous gowns, gorgeous color, and dripping acid. It’s a good time.

Special features on the disc include a trailer for the film and a menu with direct links to the musical numbers.