On Blu-ray: Baby Doll (1956) Terrorizes the Catholic Legion of Decency 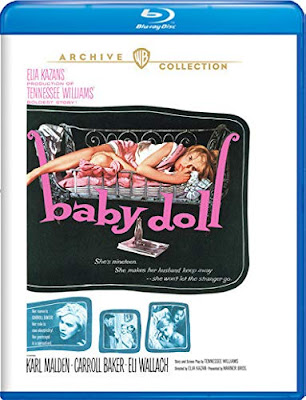 Baby Doll (1956) is an outrageous, erotic, woozy ride. Condemned by the Catholic Legion of Decency, it consistently pushed the limits of respectability and almost entirely through the power of suggestion. Screenwriter/Playwright Tennessee Williams had plenty to write about life in a heated Southern milieu, and this was one of his boldest statements. The film is now available on Blu-ray from Warner Archive.
Carroll Baker is the titular Baby Doll Meighan, a nineteen-year-old who is married to the scummy and horny cotton miller Archie (Karl Malden). She was his child bride; it was her dying father’s way of ensuring she was cared for, but the pair has struck a bargain that they won’t go to bed until she’s twenty.
However, now that they’re one sleep away from the big day, Baby Doll is reluctant to fill her side of the bargain. Of course Archie is eager to make things official with his bride, but he’s distracted by crime: he burns down the cotton mill of his competitor, the Italian immigrant Silva Vacarro (Eli Wallach).
Vacarro quickly figures out the cause of his misfortune and he comes to the Meighan residence to get proof, knowing that the community around him will not protect him and that he needs all the evidence he can get. He attacks with charm. Baby Doll is home alone, so he attempts to woo the information out of her.
Accustomed to being leered at by the disheveled and vile Archie, she’s confused and excited by the attentions of this slick and handsome man in black. They both enjoy what turns into an afternoon of seductive games. Of course Vacarro is laser-focused on getting a signed confession from Baby Doll and protecting his interests, but he finds himself increasingly delighted by their erotic interactions. Flustered and stunned by the methods of this man with gentlemanly tendencies and dignity, Baby Doll begins to realize she couldn't tolerate Archie ever touching her.
It’s all a heated mess of desires, with Baby Doll the only innocent (even her elderly Aunt Rose Comfort [Mildred Dunnock] proves herself to be greedy and dishonest); though over the course of a day she grows up a lot. Archie is all greed and lust; there’s no nuance. On the other hand, Vacarro is complicated. While he’s ferociously focused on his own interests, he has the sense to slow down and appreciate the charm of the woman he is seducing, and somehow manage to have it both ways.
The featurette Baby Doll: See No Evil is included in the special features on the disc. It includes interviews with Baker, Wallach, and Baker. In a jaw dropping moment, Baker says she was surprised that the film was viewed as scandalous.
Baker herself said that they were all probably so wrapped up in the process of filming that they didn’t process the reality of what they were making. Talk about being absorbed. I don’t see how anyone involved with Baby Doll could have missed how outrageous it was, because every moment of this film throbs with eroticism. I have often wondered how it was ever made in the conformist climate of the 1950s. Did the studio see the name Tennessee Williams and think “prestigious playwright, we’re good”?
Even at the time it was made, Baby Doll tread a complicated path: while it aroused moral indignation, it also won major attention during award season. In a way it isn’t hard to understand. It’s simply a great film: entertaining, phenomenally acted, beautifully staged by director Elia Kazan, and full of brilliant insights about human desire.
In addition to the featurette, the special features on the disc include a trailer for the film. Many thanks to Warner Archive for providing a copy of the film for review. To order, visit The Warner Archive Collection .
Posted by KC