On Blu-ray: A Stunning Cast in John Huston's The Night of the Iguana (1964) 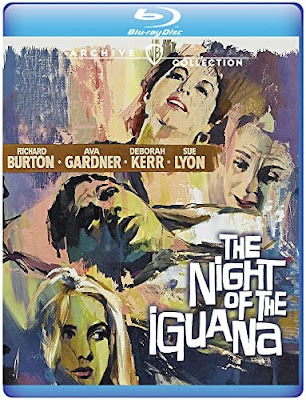 I don’t know how many times I’ve watched Night of the Iguana (1964) and I’ve always gone into each viewing thinking of it as an Ava Gardner film. Which isn’t entirely off-base. It’s one of her best; she gets the chance to truly act, still gorgeous, but far from the glossy movie queen image that brought her fame.
This is much more than a Gardner flick though. It’s full of incredible performances, brought to their heights with the support of director John Huston. It’s best described as a great ensemble piece. I was reminded of that when I recently revisited the film on a new Blu-ray from Warner Archive.
Based on a stage play by Tennessee Williams, Night of the Iguana is a simple story that covers the breadth of human need and desire, as is typically case with the playwright’s works. Richard Burton is a defrocked clergyman making his living as a tour guide. He trundles up to a cheap Mexican hotel, with a bus full of confused school teachers and one 16-year-old (Sue Lyon) who is determined to seduce him. There he reconnects with the owner of the ragged establishment and widow (Ava Gardner) of an old friend he’d hope to see. Soon they are joined by an artist (Deborah Kerr) and her ailing poet grandfather (Cyril Delevanti), who have no money, but hope their skills will pay their bills from day-to-day.
What follows is a series of emotional collisions, between the tour guests and Burton (Grayson Hall is especially indignant as their leader), the sexually charged Lyon and Burton, Gardner and Burton, Gardner and the constantly cash-poor Kerr, and at great length, Kerr and Burton. All of these interactions vibrate with the messiness of life. The misunderstandings, missed connections, frustrations, and chaos that come with being human come to life in that particular way Williams had of bringing truth and high drama together. Everyone is at their best here; the set stories that Huston was a sympathetic and encouraging director are shown to be accurate on the screen.
What struck me on this watch though was Burton and Kerr. They have several frank discussions which I’ve come to see as the most profound strength of the film. These two strangers who have spent their lives staying within certain boundaries open themselves up to each other and enjoy a free and deep emotional intimacy. It’s moving, sad, and in a lot of ways amusing to see them connect and, in a way, hold confession for each other.
I’m grateful for this film and the many ways it works as entertainment and something a little deeper. It’s a great showcase for its cast and the prime example of how lucky we are that a director as complex and intelligent as Huston had the power of studio budgets and support for as many years as he did.
Special features on the disc include a trailer for the film and the illuminating documentary shorts On the Trail of the Iguana and Night of the Iguana: Huston’s Gamble. Many thanks to Warner Archive for providing a copy of the film for review.
Posted by KC