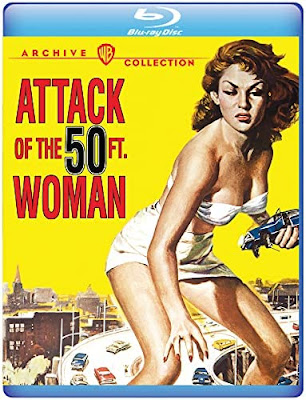 Attack of the 50 Ft. Woman (1958) is probably most famous for its poster featuring the titular giantess stepping over a busy freeway with a car in her hand, a bit of creative marketing which doesn’t reflect the plot of the movie in any way.
While the movie isn’t nearly as sensational as its marketing, it’s nevertheless a fun 66 minutes of sci-fi chaos. I recently revisited the film on a new Blu-ray release from Warner Archive.
It takes most of the running time of this flick to get to the giant action. In the first part of the movie Hayes is the draw, with an over-the-top, but sympathetic performance. She plays a wealthy woman with an unfaithful husband, played with oily sleaziness by William Hudson.
With a gigantic diamond around her neck that looks like a decoration from a chandelier and tears streaming down her cheeks, Hayes pounds the wall in frustration. She’s hooked on a toxic guy, and she knows she can’t leave him. The only one who cares for and understands her is her butler, but he is powerless to overcome her self-destructive ways.
Hudson is openly cheating on Hayes with a bubbly blonde played with effortless immoral flair by Yvette Vickers. When Hayes meets an extraterrestrial giant in the desert one night, the alien encounter eventually supersizes her as well. It’s only a matter of time before her hubby discovers the consequences of his actions.
Understandably, the best part of the movie is when Hayes assumes giant form and begins to take revenge on the world. Up until that moment though, the film moves at a good pace, with brisk action and lively character actors, like George Douglas in a tremendously goofy performance as the town’s sheriff.
It was strange seeing this movie with such a clear picture after years of less pristine VHS and television viewings. I honestly liked the grittiness before, but seeing everything with such clarity was also a revelation.
Special features on the disc include a trailer and a commentary by film historian Tom Weaver and Yvette Vickers which was one of, if not the last projects she did before she died in 2010. She does a great job reminiscing; Vickers loved the pace of making ‘B’ pictures and had a lot of happy memories to share about the production of the film.
Many thanks to Warner Archive for providing a copy of the film for review.
Posted by KC