Ralph Bellamy: The Man Left Behind 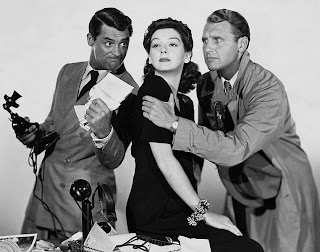 Dependable, good-natured, and dumped--that’s the classic view of Ralph Bellamy on the silver screen. Was there any another actor from the classic age of Hollywood who played more characters so unlucky in love? He’d start nearly every movie with the leading lady on his arm and then spend the rest of his screen time trying to keep her there, often unsuccessfully. Sometimes he would play the villain, but for the most part, his characters were decent, if a bit dull, fellows who would arouse your sympathy, if nothing else. At least he lost out to some of the biggest actors in the business, including: Gary Cooper, Fred Astaire, James Cagney, Fred MacMurray and of course, Cary Grant. He was discarded in favor of Grant twice, in His Girl Friday (1940) and The Awful Truth (1937), and I must say he did his best job being dumped in those movies.

Of course, Ralph Bellamy did more as an actor than watch his leading lady ditch him. In the Deanna Durbin film noir Lady on a Train (1945) he puts a surprising twist on his typical good guy role. In Brother Orchid (1940), he has strong competition in Edward G. Robinson, but for once, he does hold his own. He was also a triumph as Franklin Delano Roosevelt on the stage (where he won a Tony) and onscreen in Sunset at Campobello (1960) and in the mini-series War and Remembrance (1988-89) and The Winds of War (1983). His career lasted over 60 years and he was successful in several stage and television productions in addition to film. Bellamy likely owes some of his success in other mediums to the disgust he professed at being typecast as the dull, discarded boyfriend. Would he have escaped to Broadway and television if he had always gotten the girl?