Before Esther Williams, There Was Annette Kellerman 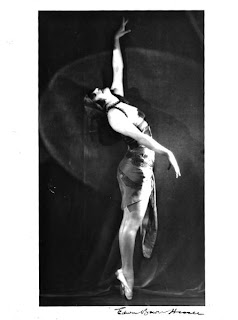 While impatiently awaiting the release of volume two of the Esther Williams collection, I’ve been admiring the work of the first swimming star of the silver screen: Annette Kellerman. The Australian swimmer appeared in over twenty silent shorts, both as herself and in dramatic roles. Her movies were not as big a sensation as Williams’, but they were definitely more sensational: she is purported to be the first actress to appear nude in a major motion picture, in the 1916 silent, Daughter of the Gods.


However, movies are a small part of Kellerman’s rich legacy. A childhood cripple, she built up the strength to walk again by swimming. She kept training, and as a teenager she was a competitive swimmer. In 1905, she became famous for her three attempts to cross the English Channel, which, while unsuccessful, nevertheless brought her great admiration. She created another stir in on a Boston beach 1907 when, in a bathing suit that revealed more than the typical dress and bloomers combination of the day, she was arrested for public indecency. She contended that the billowy suits were dangerous and created this form-fitting, but less revealing wetsuit-type design as a compromise: 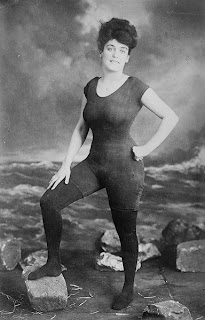 She eventually sold the suits, which would become the first modern women’s swimwear.

Though Esther Williams is often credited with creating the sport of synchronized swimming, Kellerman was equally, if not more influential. Her innovative water ballets, performed in a glass tank at the New York Hippodrome Theater, were enormously popular and helped to define performance swimming.

Kellerman visited Esther Williams at MGM when she was filming her life story, Million Dollar Mermaid (1952). In her autobiography, Williams wrote that Kellerman had been disappointed that an Australian had not been cast in the role. Williams reminded her that she was the only swimming movie star in Hollywood, let alone at MGM—a fact which Kellerman grudgingly accepted. In the end, Hollywood did recognize its first swimming star; Kellerman has a star on the Walk of Fame.

Here are a few clips of Annette Kellerman’s Hollywood films. The first is from Neptune’s Daughter (1914) (also the name of a 1949 Esther Williams movie, though the plot is entirely different):

This brief clip is from Annette Kellerman Performing Water Ballet (1925)

Here’s a lovely underwater scene from Venus of the South Seas (1924) (note the similarity to some of Esther Williams’ famous moves):

I never thought I'd write it on this blog, but this next shot is NSFW! Here's a link to a nude still from Kellerman's groundbreaking appearance in Daughter of the Gods

And here's another great page with more Kellerman shots.