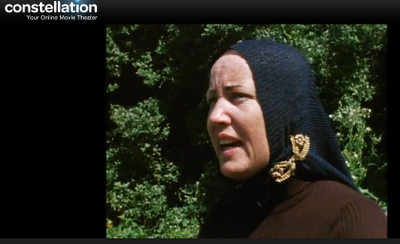 Late last year, I received an invitation to try Constellation TV, a new online theater. Rather than streaming titles at any time, users buy individual admissions to specific show times. This is meant to heighten the social experience of watching the movies in a couple of ways.

Some showings are hosted by VIPs, such as the directors of the movies and people who are knowledgeable about the movies such as film journalists. These guests introduce the films via webcam and then answer questions at the end. Showings without hosts still have social opportunities via a chat bar that can be displayed for the entire film.

Though I was invited to attend a hosted showing, it was at 5PM West Coast Time, which was a difficult time of day for me to manage. I eventually became too curious to try the service to wait for a hosted showing I could attend. I decided to watch Grey Gardens (1975) on a Sunday afternoon.

My first step was to purchase my ticket. That gave me access to the theater, where I could enter any time before the showing. There was a nifty countdown clock which showed me exactly how much time I had until show time.

The main theater screen is set up into a few sections. Along the bottom there is a bar which shows an icon for each audience member. On the right, there is a column for chat, with an entry box at the bottom. Then the movie plays in the remaining space in the upper left portion of the screen (click on the image to get a better view).

It took me a bit of digging to figure out how to make the screen full size. It turned out a little rectangular icon on the left of the screen does that. This is a good option for viewers who wish to hide the chat feature.

There were a couple of technical issues during the screening. For some reason, a line of random characters would periodically flash over the screen: 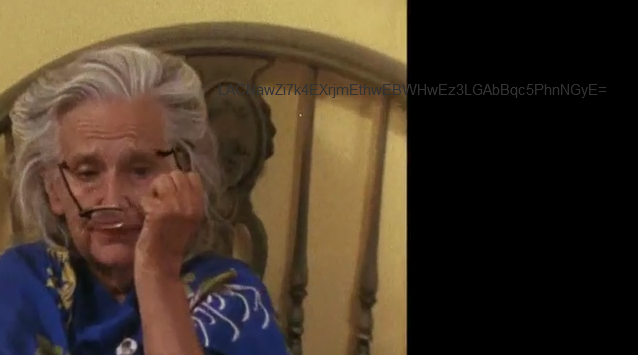 It happened frequently enough to irk me, though it didn’t quite take me out of the movie. It also stopped to load a couple of times near the end, though I couldn’t tell if that was due to Constellation or my own connection.

Except for a couple of people who popped in during the last ten minutes of the movie, I was alone in the theater for the entire showing. That was a bit of a bummer, but I didn’t necessarily expect to interact with audience members. Still, it was exciting to see those icons pop up. I realized how much fun it would be to have a little chat during certain films. As someone who can’t even stand it when audience members whisper in a regular theater, I thought this was amusing.

Though I didn’t get to have the prime, VIP-hosted Constellation TV experience, I do see some interesting possibilities with this model. If I’d invited guests to my showing, it could have been fun to chat back and forth about Grey Gardens and the loveable Edies. I also think it would be interesting to see a movie introduced by its director or by someone who had good insight into the medium. It would be about as close to a film festival screening experience as you could get online.

I’m planning to keep tabs on Constellation TV. I’d like to see where the company goes with this concept, because there are lots of interesting possibilities. I’d still like to attend a hosted event if the timing works out. I hope that some future hosted events will be scheduled at more convenient times for those of us in PST.

I’m also curious to see what kinds of titles will come out of the Criterion Collection relationship. Some of the classic titles that have been made available include the Seventh Seal (1957) and Mr. Hulot's Holiday (1953), both of which were hosted by film experts.With expanded offerings and show times, this could be a fun concept.