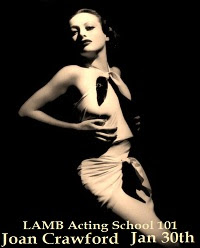 This is a repost (with edits) in honor of the LAMB event taking place on Monday, 1/29.

The pre-code drama Letty Lynton (1932) is best known for two reasons: being unavailable to the general public due to legal issues (you can read about that kerfuffle here) and the “Letty Lynton dress” —a white organdy gown with large ruffled sleeves designed by Adrian—of which Macy’s sold thousands of copies. Since there was so much off screen drama connected to the movie, I was afraid I would be underwhelmed by the movie. Thank heaven I was wrong.

Joan Crawford plays the titular heroine, an American socialite who is attempting to escape her unhappy home life by indulging in an affair with the wealthy, but slimy Emile (Nils Asther) in Uruguay. She knows this man is no good for her, but she's hooked. After several attempts to escape her toxic beaux, Letty finally hops a steamship for home. While onboard, she meets Jerry (Robert Montgomery), a playful, wealthy American. The pair fall in love, and are engaged to be married by the journey’s end. Unfortunately, Emile is determined to win Letty back, and he isn’t going to be nice about it. Letty spends the rest of the flick getting herself out of this situation in a decidedly pre-code fashion.

This simple story is made more intriguing by the well-tuned performances of a solid cast. Director Clarence Brown guides his players with a sure hand, smoothly changing the tone as the drama unfolds--from lightly screwball to depressingly dingy, gently romantic to tense and threatening. Letty’s showdown with Emile is a particularly gripping, horrific scene.

I also enjoyed the easygoing rapport between Letty and Jerry as they got to know each other. Clark Gable was originally slated for the role of Jerry, but I don’t think he could have managed the mixture of playful affection and gravity that Montgomery accomplishes here.

Crawford effectively demonstrates the hurt bubbling beneath her flippant party girl shell. She convincingly portrays a desperate woman, who regrets ever acting on her boredom. Once she was light and happy, but now that she has given in to her lust, she has also unleashed her dark side. She is clearly ashamed of her fall from grace, though she is willing to do anything to fight her way back.

My only complaint is that the ending felt too pat. While I do think it is possible that the wealthy and influential could affect this sort of a resolution, it is a bit of a dramatic letdown after such an intense climax. Without giving too much away, I’ll just say that there’s no way the drama could have panned out that way after the code went into full effect.

Here she is on What's My Line?

Crawford also makes an appearance in this Mountain Dew ad.
Posted by KC