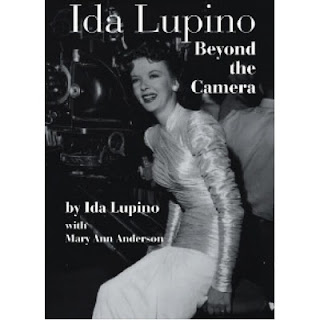 Father made a remark. “Ida,” he said, “the player whose likeness appears on those pieces of film is important; the man who determines what pieces is the most important of all. He is the director. Just remember that!”

I almost didn’t think I was going to make it past the first section of Ida Lupino: Beyond the Camera. In it, author Mary Ann Anderson describes the sad condition of Lupino’s Brentwood Heights estate when they first became acquainted in 1983. It was horribly depressing to think that my beloved Ida had once lived in a place with a broken toilet and patio furniture sitting in the bottom of a slimy, green swimming pool.

Fortunately, she had the means to turn things around. Anderson, an agent who was her friend for twelve years, describes how she also played a role in improving Lupino’s late life circumstances. Then the book turns to the rest of Lupino’s life: before and behind the camera and personal details. It’s a fast, but substantial read.

Before reading Beyond the Camera, the only Ida Lupino biography I’d ever read was a book by William Donati. It turns out Lupino was not fond of the man. Though he was once her houseguest, she didn’t consider him a close friend, and his book was unauthorized.

As with Donati, it appears Lupino did not hold back her feelings when she felt strongly about another person. This included her neighbors, who would get soaked by her garden hose if they got on her bad side.

It was amusing to read that she even had an issue with Robert Osborne, who irked her with some inaccurate reporting when he was better known as a writer. This is the first time I’ve heard of anyone being annoyed by Mr. Osborne! It’s a good thing he never got within hose range.


Reading Beyond the Camera is a lot like sitting next to Lupino while she dishes on these and other personalities, acting and her fascination with directing and producing. Always fiery and opinionated, she tended to be more generous in her opinions than you’d gather from these two anecdotes. For every enemy she crowns, there’s a long list of co-workers she throws her affection to, including Olivia de Havilland, Barbara Stanwyck and James Arness. She also had great respect for her longtime business partner, and one time husband, Collier Young.

Lupino shares loads of interesting anecdotes about her career and life. The moments that made me wish I’d been there with her where when she lost her temper, such as the time she got into a pushing fight with Mae Clarke at the Motion Picture Country Home because she thought Lupino had stolen her false teeth. The punch line for that story had both women laughing in the end.

Beyond the Camera is essentially a mixture of scrapbook and journal. It’s got tons of amazing photos. I don’t think I’ve seen half of these shots before. Most of them are candids from on the set, though there are a few personal photos from later in Lupino’s life. I’m most fond of a picture of her in velvet pants and elegant flats, peering intently into the lens while she directs a television western.

At times I wished the book a had had another edit. There were a few instances where transitions to quotes were a bit confusing or the phrasing puzzled me for a moment. In a way, this fit the loose, anecdotal style of the book, but it could have been an easier read. That said, I didn’t sleep much the night I picked up this book. Once Ms. Lupino started chatting in my ear, I had to see her through.


Thank you to Bear Manor Media for providing a review copy of this book.
Posted by KC