The Kickstarter Campaign to Put Clark Gable on the Bench 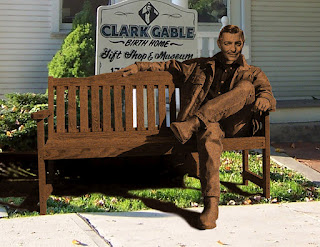 I wanted to let you all know about a great Kickstarter campaign now in progress. Sculptor Lou Cella would like to sculpt a life-sized statue Clark Gable sitting on bench in front of the Clark Gable House in Gable’s hometown, Cadiz, Ohio. He has the support of the Clark Gable Foundation, also located in Cadiz. What they don’t have is the $80,000 needed to finish the project.

For those of you not familiar with Kickstarter, it is a grassroots method of quickly gathering funds for the completion of various kinds of projects. I’ve seen it used most frequently to fund independent films. Each campaign is schedule for a set period of days. If the donation goal is not met by the last day of the campaign, then all funds are returned to the donors. So this is all or nothing!

Since the campaign kicked off on February 1st (Clark Gable’s birthday), they’ve only raised $535. That’s a long way from success. There are lots of incentive prizes, even for donation of as little as a dollar. The campaign link is here.

There’s more information about the sculptor Lou Cella and the project on his Facebook page . 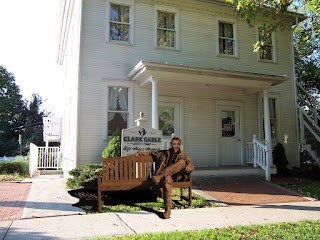 I really like this idea. It would be great to be able to go visit the statue some day. I always thought it would be fun to sit in Clark Gable's lap.
Posted by KC