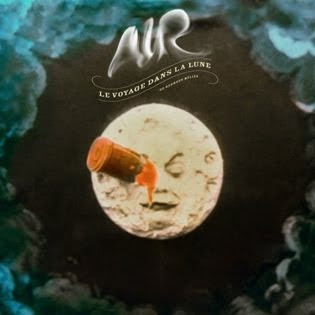 Air is one of my favorite bands, so I would have thought I’d be delighted when I heard they would be composing the soundtrack for the color restoration of A Trip to the Moon (1902), but I wasn’t so sure about it at first. Though the band has always used a rich pallet of sounds, from banjos and pianos to keyboards and electronic effects, I’ve always thought of them as a very modern, even futuristic group. Would their style work with a 110-year-old film?

I shouldn’t have been surprised that it did. After all, Air had its big break with the album Moon Safari, which they promoted with a video about a monkey going into space (Sexy Boy is still one of my favorite Air tunes). Nicholas Godin and Jean-Benoît Dunckel, the duo who form Air, have always had their thoughts on the moon.

The group has also successfully scored movies before, from The Virgin Suicides to Lost in Translation. With these films, and with A Trip to the Moon, they’ve always somehow managed to make music that suits the action and yet still sounds distinctly like Air. You can’t exactly call them musical chameleons, because they never change their colors, but the effect they have is something like that.

While the album is titled Le Voyage Dans La Lune, it obviously needed more music than the 12 minutes of soundtrack recorded for the restoration. The tunes that fill out the running time are all appropriately space age ethereal. Seven Stars is a dreamy tribute to the great beyond, with hushed vocals, soft piano, and synthy space sounds. Retour Sur Terre has a familiar Air cadence, but its melancholy, distant piano made me think of some of the quieter moments in the Blade Runner (1982) soundtrack. It had a nostalgic feeling, touched with space age mystery.

The music from the film soundtrack is much livelier and adventurous. I thought the music from the opening scenes, called the Astronomic Club, was especially interesting, with its oozing, detuned notes and barnyard animal yelps. I know that sounds terrible, but it works, and it gets better every time you see it with the film.

I also couldn’t believe the funky Sonic Armada worked so well for the scenes below the surface of the moon. This was the part of the soundtrack that was the most difficult for me to accept, and now it is one of my favorite pieces. It truly grasps the wildness of what these hapless space explorers are experiencing.

My favorite theme in the film was also the shortest: the few seconds of spooky, wordless vocals and electronic tones that scored the shot of the space ship landing on the moon’s eye were perfect. It was a moment that I couldn’t imagine anyone but Air executing so elegantly.

The hand-tinted version of A Trip to the Moon is like a surrealist painting in motion. While it is possible to place it in its time, the vivid hues somehow work to make it simultaneously timeless. The plinks and plops of the percussion and space station keyboards in the soundtrack worked eerily well with those frames from long ago. Having seen a great deal of Georges Méliès’ fanciful films, I wonder if he would have marveled at the way these often distinctly modern sounds support his work in such a bizarrely appropriate way?

As an Air album, this is a strong group of songs, on a level with their best work. I don’t think the movie soundtrack is going to inspire universal love. It’s too adventurous to attract that kind of affection, but I also think that the people who enjoy it will find it hard to view the film without it once it has gotten under their skin. That’s what happened to me.


Thank you to EMI Music for providing access to the album.
Posted by KC