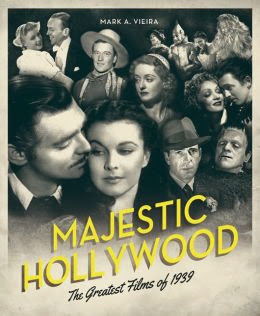 Though many will champion other years, I agree with the common belief that 1939 was Hollywood's most remarkable 365 days. Art, commerce, society and luck combined to give an unprecedented boost to the product of an industry celebrating its 50th anniversary. Majestic Hollywood celebrates fifty of these treasures, from B pictures to glossy epics.

While reading the book, I had to keep reminding myself that this amazing variety of films all debuted in 1939. So many of them are classics, and most are memorable in some way. It was the year of Gone With the Wind, The Wizard of Oz and Mr. Smith Goes to Washington. Directors William Wyler, Cecil B. de Mille and John Ford were among the giants thriving in the industry. Bette Davis was a the top of her game and Vivien Leigh, William Holden, Ingrid Bergman and John Wayne were among the stars who made their big breakthroughs. Technicians like cinematographer Gregg Toland polished their art, and sound, color and production reached new heights of sophistication.

Times were tense and exciting in 1939. Even in newspapers of the day, you can see that people sensed they were living in remarkable times. Amid the relief of recovery from the Depression, there was anxiety over the spread of fascism across Europe. Life was intensely beautiful and terrifying all at once.

Vieira captures the flavor of the times through these films, weaving in set gossip with current events and audience reactions. The entries in the book are arranged chronologically in order of release and presented in a pleasing orderly fashion, with a quote from the film, a (sometimes amusingly) concise plot summary, one or two quotes from critics of the time and a brief essay about the making of the film.

I especially enjoyed the tidbits of information in the production notes. Some were well-known Hollywood legends, but many details surprised me. I didn't know Bette Davis nearly backed out of Dark Victory because of her immense personal problems at the time. How sad it would have been not to have that performance to admire! I also loved director Ernest Lubitsch's description of Garbo's startled and joyful reaction to the laughing crowd at the premiere of her first comedy, Ninotchka. I was surprised she cared so much what people thought.

Since this is a Vieira book, the images are clearly chosen with care. Here you can see all the expertise of this skilled photographer, collector and champion of Hollywood portrait legend George Hurrell. The format and style of Majestic Hollywood remind me a lot of the Films of books featuring stars like Joan Crawford, Jean Harlow and Carole Lombard that I used to collect as a teenage classic movie fan, but they never had photos as stunning as these. They elevate the book from a fun, light read to something a bit more special.

Many thanks to Running Press for providing a review copy of the book.