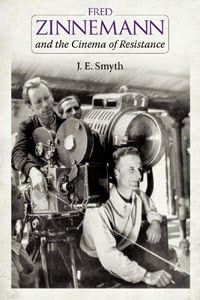 Fred Zinnemann and the Cinema of Resistance
J.E. Smyth
University Press of Mississippi, 2014

Before I picked up Fred Zinnemann and the Cinema of Resistance, I didn't think I had any set notions about the Vienna-born director's style. I only knew that if I saw his name in the credits of a film, it was inevitably going to be worth seeing. With the interesting exception of Oklahoma! (1955), he focused on crafting some of the best dramas of the studio age and beyond, from Act of Violence (1948) to The Day of the Jackal (1973).

Once I started the book, it didn't take me long to realize that there had always been a common thread that had attracted me to Zinnemann's movies: he gravitated towards stories of misfits and mavericks fighting against the system. With careful attention to historical detail, J.E. Smyth explores the films where he most diligently fought against fascism and systematic cruelty. She reveals a director who quietly, but deliberately funneled his anger about oppressive societal forces, much of which was inspired by his own childhood experiences, into strong work. He used popular films to communicate a serious message.

Smyth pays ample attention each film, focusing entire chapters on the production, reception and history behind projects including High Noon (1952), From Here to Eternity (1953) and The Nun's Story (1959). She finds fascinating details about Zinnemann's process and provides rich background on the events that inspired his work. Each chapter could stand on its own, though it is even more interesting to compare the films, which are striking both for their similarities and differences.

While the stories and the world surrounding them vary widely, Smyth finds several interesting connections between Zinnemann's films. I was especially interested in the attention he gave to stories about women, particularly those whose had been overshadowed by the deeds of men who were no more accomplished. In High Noon (1952), he spotlights actresses Grace Kelly and Katy Jurado, powerful figures in the traditionally male-dominated western. Audrey Hepburn and Vanessa Redgrave play heroic, complicated roles in The Nun's Story and Julia (1977) respectively.

There is also a strong focus on Zinnemann's compassion for people without a voice, and particularly children. With The Search (1947), he worked in partnership with the equally sensitive pre-stardom Montgomery Clift to alert American audiences to the plight of displaced children who suffered in concentration camps during World War II. While the director was often criticized for the way he told a story, and particularly one as sensitive as this one, Smyth shows the care with which he made decisions for every production. He always strove for maximum impact, and sometimes that required controversial decisions made for complex reasons.

Intelligent and strong-willed, Zinnemann delicately crafted a career of great integrity. He knew how to protect his vision without burning bridges, earning the title of "the iron hand in the velvet glove." He maintained control of his movies by cutting with his camera and approaching producers and studio heads firmly, but cordially. The director was also patient and attentive to his actors, winning admiration, and amazing performances from them. His strength helped him to outlast the studio system and produce strong work until the end of his career, unlike many of his contemporaries.

The Cinema of Resistance is a fascinating look into the work of an uncommonly brilliant and terribly overlooked director.