Book Review--Buzz: The Life and Art of Busby Berkeley 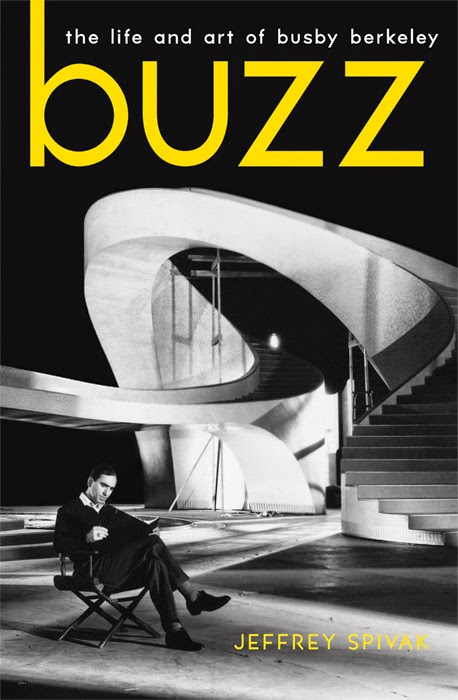 Buzz: The Life and Art of Busby Berkeley
Jeffrey Spivak
The University Press of Kentucky, 2011


I've been wanting to check out Jeffrey Spivak's biography of Busby Berkeley ever since it came out a few years ago. Recently, I finally had the chance to do so, and it was worth the wait.

The visually inventive dance director was one of the first names I learned as a young classic film fan. I recorded 42nd Street (1933) off broadcast television and marveled at the kaleidoscopic genius of this singular talent.

Berkeley was most famous for arranging cascades of beautiful women into stunning formations that were both graceful and tightly precise. With these complex routines, he brought the musical back from the audience fatigue it had suffered in the early days of sound. Though the dance director (he preferred that title to choreographer) found great success on the Broadway stage before he was talked into trying Hollywood, his visions were made for film. He stripped musicals of their stage bound awkwardness.

While Buzz does delve into both the professional and personal life of its subject, it is most successful in capturing Berkeley at work, creating on the set, shouting with wild-eyed impatience at his cast and crew and yet always willing to have a laugh at his own expense. The director approached his craft with confidence, sure of his vision and ability, whether with a musical or a drama.

Berkeley laid claim to pioneering the "big, beautiful close-up," giving dozens of individual showgirls their chance to shine. He was two ways about his "girls"--sometimes caring for them, often working them to the edge of sanity. While he wasn't wolfish about the beauties around him every day, he did find five of his six wives among them.

What exactly happened with those wives, or much else in Busby's personal life is not made entirely clear in Buzz. He is shown constantly at work, prioritizing Gertrude over anyone else in his life and struggling with alcohol. His spouses claim cruelty and abandonment and for the most part his marriages are not detailed any more than that.

There may not have been much more to tell. Berkeley had little time for a social life. He had few friends. When his mother died, he lost his confidante and for a while his will to live.

Talent was never an issue with Busby Berkeley though. His professional success rose and fell with the public taste for the musical, and his own ability to keep his alcoholism and temper in hand.

Sometimes his cruelty could cause mental anguish, as with Judy Garland, who he directed in several pictures, increasing his pressure on the fragile star with each one. He could also be dangerous in his insensitivity. As director for swimming star Esther Williams, he put her in situations that risked her life, including a high dive that broke three vertebrae in her neck and a treacherous waterskiing scene she filmed while pregnant.

Berkeley could also be inspirational. While he would never win a prize for his personality, stars like Ruby Keeler, Joan Blondell and even the battle-scarred Williams were in awe of his talent. He was bubbling over with ideas until the end of his life and he always knew what to do with them.

Buzz goes into remarkable detail about Berkeley's work methods and life on the set, and those elements flow together gracefully. Technical aspects of the work meld together easily with snippets of gossip and insight into all players, from the studio heads to the patient dancers awaiting instructions from their director. It's an enjoyable read, and while Busby the man remains a bit mysterious, his creative life is revealed in perfect detail.

Many thanks to The University Press of Kentucky for providing a copy of the book for review.