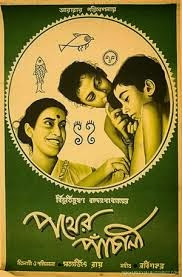 Indian director Satyajet Ray's Apu Trilogy is an epic of loss and resurrection, focusing on the birth and maturation of a curious, intelligent boy. The characters of Pather Panchali (1955), Aparajito (1957) and Apu Sansar (1959), people who know and love Apu, suffer and love intensely, sometimes one because of the other, and always with the pressure of survival upon them.

I spent Sunday of Memorial Day weekend at the Pacific Place theater, eating curly fries, drinking lime Coke, and sobbing my way through a box of tissue watching a newly-restored 4K print of this glorious trilogy. The experience has been the high point of SIFF 2015 for me so far.

While there were definitely diminishing numbers with each entry of the trilogy, it was heartening to see an enthusiastic, near-capacity audience for the Apu films.

The crowd was most rapt (I don't think I heard a sound for the entire running time) for the first entry in the series, Pather Panchali (Song of the Little Road), in which Ray introduces Apu (Subir Banerjee), his independent-minded sister Durga (Uma Das Gupta), who dotes on him from his birth, his intellectual dreamer and priest father  (Kanu Bannerjee), mischievous "Auntie" Indira Thakrun (Chunibala Devi, that year the wizened character actress would die of influenza) and most importantly, his mother Sarbojaya Ray (Karuna Bannerjee), the true heart of the series, whose suffering and strength will mold and influence Apu.

Pather Panchali follows this cast of characters through poverty, heartache and enough small victories to keep them moving forward. With a pleasantly sleepy pace, and an eye for details like awkwardly rambling kittens and wind rattling through tree leaves Ray shows the majesty of the rural settings and the depressing decline of a family of noble caste that has fallen on hard times.

Apu's mother is constantly at war with Durga, humiliated by her daughter's penchant for stealing. Both of them pine for a better life--one working for it, the other thinking the effort futile and taking what she can without concern for her methods. Apu's father craves a spiritual, intellectual life and he cannot reconcile this with his wife's pleas that he make better wages.

It is these characters that drive the action in Pather Panchali. Young Apu is a bright-eyed observer, treated like a little prince by his doting mother, and trying to make sense of all he sees.

The film is the most beautiful of the trilogy. Ray captures the joyous magic of the rural setting, a place where Apu, his sister and their friends can ramble and play like happy puppies. It is also in many ways the most brutal of the three, because the family's struggle to survive is at its most intense.

In the Aparajito (Unvanquished), Apu moves with his family to Benares, in search of more opportunity. While they still face plenty of struggle, there is finally some reprieve from their poverty. The city frightens Apu's mother, and she is especially threatened by the many strange men who are now a part of her surroundings. She relishes having enough food to eat though, and there are a few blessed moments where she smiles and takes a little pleasure in life.

Happiness does not last long for her though, as misfortune finds the family again and she must also deal with her growing son and the increasing distance between the two as education fills him with ambition. Where previously Apu has said very little, he now finds his voice. The more he learns, the more he participates in life. This worries his mother, because she fears losing him, but she does not hold him back. Above all else, she wants him to be happy. 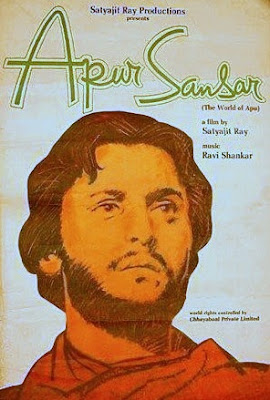 Apu Sansar (The World of Apu) has the most humor of the three films, and perhaps the most intensely-felt agony as well. Now Apu is fully  grown, and while he is well educated, he still imagines himself the prince his mother raised. He doesn't want work to get in the way of his writing ambitions. Unfortunately, those high standards stand in the way of his fortune and he struggles to pay the rent, selling off volumes of his library just to survive.

When a spontaneous trip to a wedding ends in Apu marrying the bride, he decides he finally has someone worth working for. The prospect of building a family enthralls him, and he lives for little else, which proves to be dangerous when that sense of peace is threatened.

It had been a couple of decades since I first saw the trilogy. While I had remembered all the strongest emotional moments, the more delicate details had escaped me and I found the balance between the melodrama and those observational moments intensely pleasing. The thing that struck me overall was the love in this series--the way the characters work so passionately to elevate each other. I saw this particularly in the mother, who puts all of her energy towards making life better for her family, only to feel unappreciated and lonely, if still full of pride for her son.

Ravi Shankar's score is the perfect complement to the trilogy. His yearning, hopeful main theme is rightfully one of the most beloved in world cinema. The musician's sitar is so expressive that it serves as a sort of Greek chorus, commenting on the action with emotion that matches the passion of the characters onscreen.

While there is much suffering and tragedy in the Apu Trilogy, you leave it feeling elated, because love saves Apu and gives him belief in starting anew. You can feel the support of the generations before him, those who adored him, pressing him forward to do them proud.

While all film restoration projects are remarkable just for their existence, the story of this one is particularly impressive. The original elements, which were used for the new print, were once severely damaged by fire. These reels were saved, eventually to be re-hydrated and combined with other existing reels to make the final print. The results are nearly flawless: clean, detailed and with just enough grain to give the film warmth. It was a huge privilege and delight to see these films so beautifully presented on the big screen.