It is almost time for TCM Classic Film Festival 2017. As always, it will take place at several venues along Hollywood Boulevard. This year the event will take place from April 6-9. The theme: Comedy in the Movies, which I love. We could all use some laughs.

Perusing the TCM Classic Film Festival schedule, which came out this week, can drive you to drink. There's so much to take in: films, guests, special programs and ceremonies, and so many good things scheduled at the same time.

I have to keep reminding myself that I've had a wonderful time at each festival no matter what I ended up seeing. While the options can be overwhelming, the reality is that you can only see one movie at a time, and that's a beautiful thing.

It always helps to approach the TCMFF schedule with some priorities. Over the years I have often made seeing special guests a priority. It is a bittersweet necessity given the age of those we admire as a part of the classic film fandom. We're lucky to be able see the actors and filmmakers who inspire us, but there's always the possibility that it could be the last time.

My other priorities this year: see as many nitrate films as possible, try a few new titles cold, with no research other than reading the program description, see some old favorites for the first time on the big screen and most importantly, catch up with friends who I only communicate with on social media for the rest of the year.

I will focus on these things, leaving myself open to other programs, book signings and the like as my schedule permits. It is best to approach this festival with an open mind; a change of plan can be the catalyst for an amazing experience. You never know when a sunny Sunday will make you suddenly switch out a drama that was a must-see for a wild comedy that ends up being a festival favorite.

There are all sorts of interesting events happening the first day of the festival. I plan to keep things fluid the first half of the day. It might be fun to check out the Hitchcock Fans Meetup or the Remembering Robert Tribute.

I definitely want to snag a seat in the opening night red carpet bleachers. This will be my one chance to see Sidney Poitier, Norman Jewison and several other celebrity guests.

After that, I'd love to see the hilarious William Powell and Myrna Loy marriage comedy Love Crazy (1941), but if I can't make it down to the Egyptian in time, it would be amazing to see one of my favorite comedies, Some Like it Hot (1959) in the much closer Chinese Multiplex.

A screening of The Man Who Knew Too Much (1934), featuring Peter Lorre, will be my first opportunity ever to see nitrate film projected. If I need to skip the first film to get in line for this, I'm going to do it!

I never miss the hand and footprint ceremony in the forecourt of the Chinese Theater and this year's event will be extra special. Not only are Rob and Carl Reiner legendary entertainers, but they will be the first father and son to be so honored at the same time.

I'd love to catch Born Yesterday (1950) next, but the timing will be tight. It will be more likely that this will be my big chance to get a decent meal for the day. Nothing wrong with that!

In the next time slot Lady Sings the Blues (1972), The Princess Bride (1987) and Monkey Business (1931) all tempted me, primarily because of the opportunities to see Donald Bogle, Rob Reiner and Dick Cavett respectively introduce them, but I find the idea of the new-to-me French thriller Panique (1946) irresistible.

Then off to the Egyptian theater to watch what will likely be my only silent of the festival So This is Paris (1926). The hilarious W.C. Fields comedy Never Give a Sucker an Even Break (1941) called to me, but I went for another new-to-me film so that I would be right there to get in line for one of my festival must-sees, Red-Headed Woman (1932). This is my favorite Jean Harlow film and the screening will be my first opportunity to see her on the big screen.

Looks like the Egyptian will be my home for most of Friday, because I plan to hop right back in line again for Laura (1944), one of my favorite films. This should be a popular title not only because people love the film, but it will be shown on nitrate.

After that I will call it a day or treat myself to the spectacle of Sean Connery with a handlebar mustache and a red shorts-sling blown up to matinee size in the midnight movie Zardoz (1974).

What? The festival is already half over? Just thinking about it is making me pre-nostalgic.

The last two days of TCMFF are going to be the most brutal for me schedule-wise. So many things I want to see are slotted on top of each other.

For the first film of the day I will either go with an old favorite, The Court Jester (1955), or Arsenic and Old Lace (1944), which I haven't seen in years. I'm leaning toward the latter since Jester, as funny as it is, can drag a bit. If the line is insane for the tiny Chinese Multiplex 4 theater though, I'll nix Arsenic.

I've considered seeing The Awful Truth (1937) in the Chinese Theater next, but will probably grab something to eat and get in line for The Jerk (1979). One of my favorite comedies, also showing in the Chinese Theater, and introduced by Carl Reiner? I definitely need to make sure I get in for this one.

Then on to Chinese Multiplex to catch Best in Show (2000) with several cast members attending, including BOB BALABAN! If I can get into both The Jerk and this one? Well stick a fork in me. I might just need to sit out everything else.

The next time block is KILLING ME. Do I want to see the brilliant Buck Henry introduce The Graduate (1967) in the Chinese Theater? Or do I go to see the already heartbreakingly gorgeous Black Narcissus (1947) on nitrate at the Egyptian? There's no way around this. I am going to have to clone myself.

I am a bit intrigued by the midnight movie The Kentucky Fried Movie (1977), but this is already going to be an insane day. Might be better to give myself a chance to simmer down.

It can't be Sunday. I just got started!

This is always an impossible day to schedule due to the TBD openings for films that had overflow crowds early in the festival. My plan is to not get too attached to my plan.

The next time slot is a bummer for me because I was so excited to see The Landlord (1970) on the big screen, but there is no way I am missing The Palm Beach Story (1942) in the Chinese Theater.

That is nothing compared to the four-way torture of the next time block. I haven't seen Singin' in the Rain (1952) in a theater yet, I would have loved to see Peter Bogdanovich introduce What's Up Doc? (1972) and I hate to miss my girl crush Eleanor Parker in Detective Story (1951). But Bob Newhart is introducing Hell is For Heroes (1962). I don't usually like war films, but BOB (I seem to be obsessed with Bobs this year). It doesn't hurt that the cast also includes Steve McQueen, Bobby Darin (another Bob!) and James Coburn.

I had hoped that the Casablanca (1942) screening would be the nitrate print that was screened in Hollywood earlier in the year. Since it isn't, that's an easy skip. Speedy (1928) is one of my favorite Harold Lloyd films, so it was tough to pass on that one, but the prospect of seeing new-to-me Ginger Rogers film Lady In the Dark (1944) on nitrate for my last film of the festival is too incredible to miss.

So that's my game plan. It's going to change. And that's okay, because this festival is going to be amazing!

If you are attending and happen to see my social media pin: 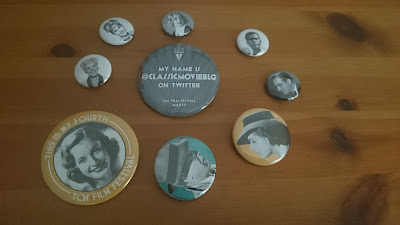 Or my Elizabeth Taylor t-shirt: 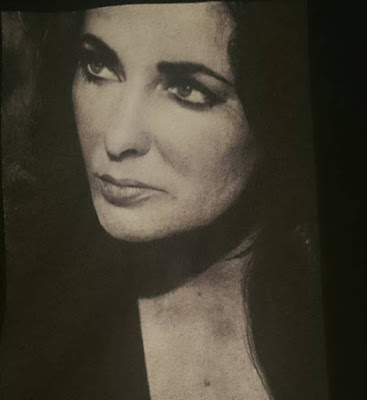 
Check out the schedule choices my fellow film bloggers have made (if you have made your own list, tell me about it in the comments or share your link and I'll add it to the list):

Blog of the Darned

I See a Dark Theater

Once Upon a Screen

Silents and Talkies Schedule and How to Follow Along From Home